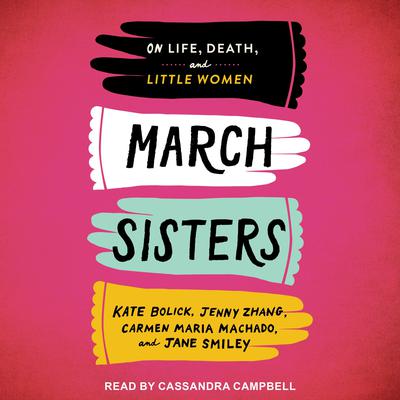 For the 150th anniversary of the publication of Louisa May Alcott's Little Women, Kate Bolick, Jenny Zhang, Carmen Maria Machado, and Jane Smiley explore their strong lifelong personal engagement with Alcott's novel—what it has meant to them and why it still matters. Each takes as her subject one of the four March sisters, reflecting on their stories and what they have to teach us about life. Kate Bolick finds parallels in oldest sister Meg's brush with glamour at the Moffats' ball and her own complicated relationship with clothes. Jenny Zhang confesses to liking Jo least among the sisters when she first read the novel as a girl, uncomfortable in finding so much of herself in a character she feared was too unfeminine. Carmen Maria Machado writes about the real-life tragedy of Lizzie Alcott, the inspiration for third sister Beth, and the horror story that can result from not being the author of your own life's narrative. And Jane Smiley rehabilitates the reputation of youngest sister Amy, whom she sees as a modern feminist role model for those of us who are, well, not like the fiery Jo. These four voices come together to form a deep, funny, far-ranging meditation on the power of great literature to shape our lives.

Narrator Cassandra Campell brings her considerable talents to this collection of essays about the impact of the semiautobiographical novel LITTLE WOMEN on four contemporary authors. —AudioFile

Jane Smiley is the author of five works of nonfiction and more than twenty acclaimed works of fiction, including A Thousand Acres, which won the Pulitzer Prize for fiction in 1992. In 2001 she was inducted into the American Academy of Arts and Letters.

Kate Bolick is a contributing editor for the Atlantic, writes for a variety of publications—including the Wall Street Journal, Cosmopolitan, New Republic, New York Times, Elle, and Vogue—and hosts Touchstones at the Mount, an annual interview series at Edith Wharton’s country estate, in Lenox, Massachusetts. Her first book, Spinster: Making a Life of One’s Own, was a New York Times Notable Book.

Jenny Zhang is an American writer and poet and the author of a poetry collection and an award-winning short-story collection.

Carmen Maria Machado is the author of several books, inclding Her Body and Other Parties, which was a finalist for the National Book Award and winner of the National Book Critics Circle’s John Leonard Prize. In the Dream House was longlisted for the PEN/Kenneth Galbraith Award for Nonfiction. Her work has appeared in Granta, the New Yorker, NPR, Electric Literature, and elsewhere. Her work has been nominated for a Nebula Award and a Shirley Jackson Award and was a finalist for the Calvino Prize.