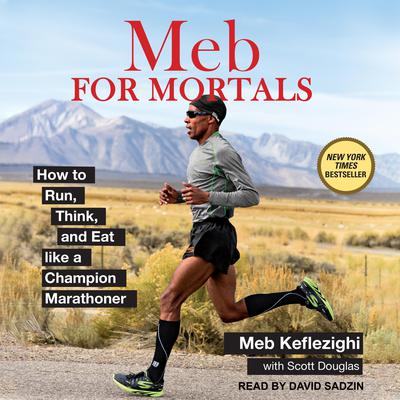 Meb For Mortals: How to Run, Think, and Eat like a Champion Marathoner

By Meb Keflezighi , with Scott Douglas
Read by David Sadzin

With his historic win at the 2014 Boston Marathon, Meb Keflezighi cemented his legacy as one of the great champions of long-distance running. Runners everywhere wanted to know how someone two weeks away from his thirty-ninth birthday, who had only the fifteenth best time going into the race, could defeat the best field in Boston Marathon history and become the first American man to win the race in thirty-one years.

Meb for Mortals describes in unprecedented detail how four-time Olympian Keflezighi prepares to take on the best runners in the world. More importantly, the book shows everyday runners how to implement the training, nutritional, and mental principles that have guided him throughout his long career, which in addition to the 2014 Boston win includes an Olympic silver medal and the 2009 New York City Marathon title.

Mebrahtom “Meb” Keflezighi and his family came to the United States after fleeing their native country of Eritrea to escape a violent war with Ethiopia. His athletic and academic successes earned him a full scholarship to UCLA, where he won four NCAA titles in one year and earned his BA in communication studies with a specialization in business. He is an Olympic silver medalist and a three-time national champion in cross country running. He came back from an injury to win the 2009 New York City Marathon. He became a US citizen in 1998. He lives in Mammoth Lakes, California, with his wife, Yordanos, and their three daughters, Sara, Fiyori, and Yohana.

Scott Douglas is a contributing editor for Runner’s World and the author of the New York Times bestseller Meb for Mortals and Advanced Marathoning, among other books. He has written about running for Slate, the Atlantic, the Washington Post, and other outlets, and has run more than 100,000 miles since taking up the sport in 1979. He lives in South Portland, Maine.