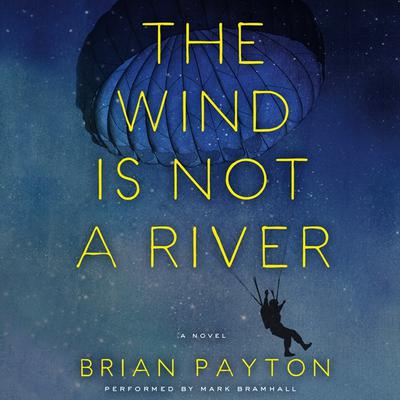 The Wind is Not a River

Following the death of his younger brother in Europe, journalist John Easley is determined to find meaning in his loss, to document some part of the growing war that claimed his own flesh and blood. Leaving behind his beloved wife, Helen, after an argument they both regret, he heads north from Seattle to investigate the Japanese invasion of Alaska's Aleutian Islands, a story censored by the U.S. government.

While John is accompanying a crew on a bombing run, his plane is shot down over the island of Attu. He survives only to find himself exposed to a harsh and unforgiving wilderness, known as "the Birthplace of Winds." There, John must battle the elements, starvation, and his own remorse while evading discovery by the Japanese.

Alone in their home three thousand miles to the south, Helen struggles with the burden of her husband's disappearance. Caught in extraordinary circumstances, in this new world of the missing, she is forced to reimagine who she is–and what she is capable of doing. Somehow, she must find John and bring him home, a quest that takes her into the farthest reaches of the war, beyond the safety of everything she knows.

A powerful, richly atmospheric story of life and death, commitment and sacrifice, The Wind Is Not a River illuminates the fragility of life and the fierce power of love.

“What a greathearted, beautifully written, and utterly riveting novel. The Wind Is Not a River has a power that brings to mind the old Greek stories of war, love, and journey.” —Ron Rash, New York Times bestselling author
“In his gripping, meditative second novel, Brian Payon explores this nearly forgotten chapter of American history…The borders between ingenuity and insanity, honor, and murder all blur as Easley comes face to face with the darkest parts of nature in a place where ‘thin fog softens every edge and line.’” —New York Times Book Review
“Brian Payton’s remarkable novel is a tightly wound double helix: the gripping tale of a man struggling to save his own life entwined with the heartrending tale of a woman struggling to save her marriage. As both love story and war story, it is a revelation.” —Julia Glass, National Book Award–winning author
“A suspenseful, beautifully researched title that readers will want to devour in one sitting.” —Library Journal (starred review)
“Top-notch…Payton has delivered a richly detailed, vividly resonant chronicle of war’s effect on ordinary people’s lives.” —Publishers Weekly
“Payton, in the loveliest of prose, illuminates a little-known aspect of WWII while portraying a devoted couple who bravely face down the isolation, pain, and sacrifice of wartime.” —Booklist
“Through a narrative strategy that alternates chapters between John’s plight and Helen’s search, Payton effectively gives the reader two visions—and two versions—of a neglected aspect of World War II.” —Kirkus Reviews

Brian Payton has written for the New York Times, the Los Angeles Times, the Chicago Tribune, and the Boston Globe. He is the author of Shadow of the Bear: Travels in Vanishing Wilderness, which was chosen as a Barnes and Noble Book Club Pick, an NPR Pearl’s Pick, and a 2006 US National Outdoor Book Awards Book of the Year. Another work of nonfiction, The Ice Passage, and a novel, Hail Mary Corner, were published to acclaim in Canada. He lives with his family in Vancouver.