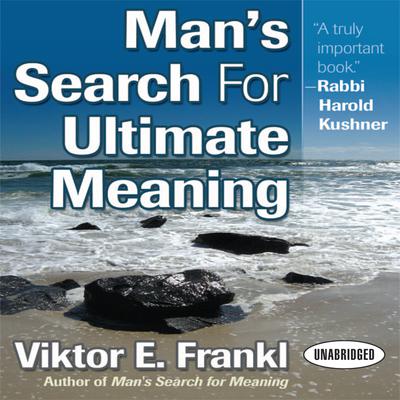 Viktor Frankl is known to millions of listeners as a psychotherapist who has transcended his field in his search for answers to the ultimate questions of life, death, and suffering. Man's Search for Ultimate Meaning explores the sometimes unconscious basic human desire for inspiration or revelation and illustrates how life can offer profound meaning at every turn.

“A truly important book.” —Rabbi Harold Kushner
“Brillant! In this book, we are privileged to share the richness of Frankl’s experience and the depth of his wisdom.” —Elizabeth Kubler-Ross, M.D.
“A powerful psychological exploration of the religious quest. Man’s Search for Ultimate Meaning is so treasured by psychologists and theologians and by men and women who wrestle with ultimate questions and encounter God as often in the questions as in the answer.” —Michael Berenbaum

Viktor E. Frankl (1905–1997) was a professor of neurology and psychology at the University of Vienna Medical School and Distinguished Professor of Logotherapy at the US International University. He is the founder of the “Third Viennese School of Psychotherapy,” commonly known as logotherapy. During World War II, Frankl spent three years in multiple concentration camps, including Auschwitz and Dachau. Since that time, he has published numerous books and has been a visiting professor at Harvard, Duquesne, and Southern Methodist universities. He has received a number of honorary doctorate degrees from many colleges and universities, including Loyola University in Chicago, Mount Mary College, and Edgecliff College. He has been a guest lecturer at universities worldwide and served as the president of the Austrian Medical Society of Psychotherapy.