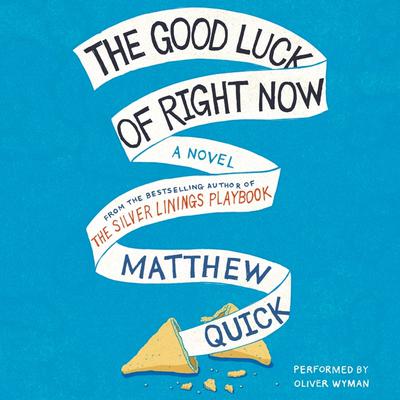 The Good Luck of Right Now

From Matthew Quick, the New York Times bestselling author of The Silver Linings Playbook, comes The Good Luck of Right Now, a funny and tender story about family, friendship, grief, acceptance, and Richard Gere—an entertaining and inspiring tale that will leave you pondering the rhythms of the universe and marveling at the power of kindness and love.

For thirty-eight years, Bartholomew Neil has lived with his mother. When she gets sick and dies, he has no idea how to be on his own. His redheaded grief counselor, Wendy, says he needs to find his flock and leave the nest. But how does a man whose whole life has been grounded in his mom, Saturday mass, and the library learn how to fly?

Bartholomew thinks he’s found a clue when he discovers a “Free Tibet” letter from Richard Gere hidden in his mother’s underwear drawer. In her final days, mom called him Richard—there must be a cosmic connection. Believing that the actor is meant to help him, Bartholomew awkwardly starts his new life, writing Richard Gere a series of highly intimate letters. Jung and the Dalai Lama, philosophy and faith, alien abduction and cat telepathy, the Catholic Church and the mystery of women are all explored in his soul-baring epistles. But mostly the letters reveal one man’s heartbreakingly earnest attempt to assemble a family of his own.

A struggling priest, a “Girlbrarian,” her feline-loving, foul-mouthed brother, and the spirit of Richard Gere join the quest to help Bartholomew. In a rented Ford Focus, they travel to Canada to see the cat Parliament and find his biological father . . . and discover so much more.

“The Good Luck of Right Now has everything I relish in a story: a flawed but sympathetic protagonist, a page-turning plot, and a cast of emotionally scarred characters for whom I rooted wholeheartedly. I loved this novel from its quirky and unconventional opening to its poignant, tear-inducing conclusion.” —Wally Lamb, New York Times bestselling author of We Are Water
“Funny, touching, wise, and ultimately life-affirming, The Good Luck of Right Now is quite possibly the greatest feel-good misfit-road story I’ve had the good luck to read.” —Garth Stein, New York Times bestselling author of The Art of Racing in the Rain
“Thanks to Oliver Wyman’s extraordinary performance, this novel should be savored in audio. Matthew Quick’s feel-good storytelling is made even better by Wyman’s eager, youthful exuberance…Wyman is simply amazing. He delivers gravelly voices and voices as delicate as spiders’ webs. He rants and roars, and he’s touching and tender in this sweet, quirky coming-of-age story.” —AudioFile
“A whimsical, clever narrative.” —Kirkus Reviews 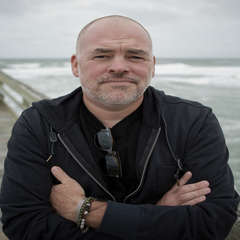 Matthew Quick is the New York Times bestselling author of several novels, including The Silver Linings Playbook, which was made into an Oscar-winning film, and The Good Luck of Right Now. His work has been translated into thirty languages and has received a PEN/Hemingway Award Honorable Mention. He earned an MFA in creative writing at Goddard College. He floated down the Peruvian Amazon, backpacked around southern Africa, and hiked to the bottom of a snowy Grand Canyon before returning to Philadelphia and beginning to write full time.