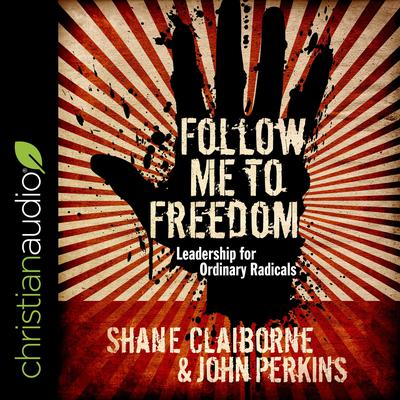 Follow Me to Freedom: Leading as an ordinary radical

Re-imagine leading and following in a world longing for true justice, compassion and freedom followers of Christ yearn to see the world changed in compassionate, positive, effective ways. As prophetic voices, Shane Claiborne and John Perkins lead the way in this move to be the hands, feet and heart of Jesus. One is young, a self proclaimed reformed redneck who grew up in the hills of Tennessee and now lives in inner city Philadelphia and the other is decades older, an African-American civil rights leader who was almost beaten to death by police in Mississippi, and went on to found a reconciliation movement and counsel three American presidents. Claiborne and Perkins draw on more than a century of combined following and learning, activating and leading. Together they craft a timely message for ordinary people willing to take radical steps to see real change happen. In Follow Me to Freedom, Claiborne and Perkins lead the way toward justice for all, unfolding a proven strategy as ancient as the patriarchs of faith and as fresh as the needs of every human heart. Starting with Moses as a model, they re-imagine leading and following in a world desperate for true social justice, compassion and freedom. They offer practical ways to internalize and live out God’s promise of freedom in the twenty-first century. Followers of Christ will not only be inspired but also catalyzed into action, and the world will never be the same.

John Perkins was formerly chief economist at a major international consulting firm where he advised the World Bank, United Nations, IMF, US Treasury Department, Fortune 500 corporations, and governments in Africa, Asia, Latin America, and the Middle East. Since then, his books on economics and geopolitics have been New York Times bestsellers and sold more than one million copies. He has lectured at more than fifty universities around the world. He has been featured on ABC, NBC, CNN, NPR, A&E, the History Channel, Time, New York Times, Washington Post, Cosmopolitan, Elle, Der Spiegel, and others, as well as in numerous documentaries. He is a founder and board member of nonprofits devoted to establishing a world our children will want to inherit.

Shane Claiborne graduated from Eastern University and performed graduate work at Princeton Seminary. His ministry experience is varied, from a ten-week stint working alongside Mother Teresa in Calcutta to a year spent serving a wealthy mega-congregation at Willow Creek Community Church outside Chicago. During the recent war in Iraq, he spent three weeks in Baghdad with the Iraq Peace Team. He is also a founding partner of the Simple Way, a faith community in inner city Philadelphia. He writes and travels extensively, speaking about peacemaking, social justice, and Jesus. He is featured in the DVD series Another World Is Possible and is the author of the several books, including The Irresistible Revolution, Jesus for President, and Becoming the Answer to Our Prayers. His work has been featured in everything from Fox News and CNN to the Wall Street Journal and National Public Radio.

Dr. John Perkins is president of the John and Vera Mae Perkins Foundation of Jackson, Mississippi. He is one of the leading evangelical voices to come out of the American civil rights movement. Dr. Perkins is an author and international speaker and teacher on issues of racial reconciliation, leadership, and community development. For his tireless work he has received honorary doctorates from Wheaton College, Gordon College, Huntington College, Geneva College, Spring Arbor University, North Park College, and Belhaven College. In 2004 he partnered with Seattle Pacific University to launch the campus-based John Perkins Center for Reconciliation, Leadership Training, and Community Development.