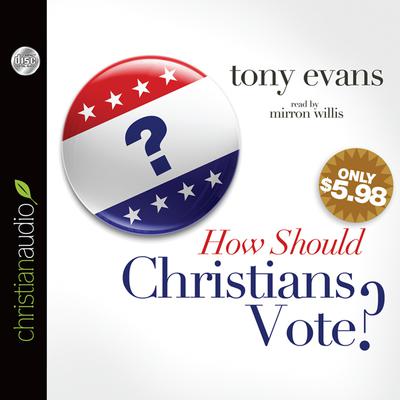 How Should Christians Vote?

Christians are a large and influential voting block today. But as each governmental election approaches, an increasing polarity occurs within those claiming the Christian faith. This comes as a result of party-voting rather than voting according to Biblical mandates and authority. To refocus correctly, Dr. Tony Evans goes back to the basics and teaches on how God established government as a divine institution whose tasks include promoting the well-being of those within its realm and protection from evil. Scripture trumps all political alliances making the voting decision a critical opportunity for Christians to promote God's Word and His values through whom they elect. In the face of increasing emotions the Christians representing God's kingdom values should communicate His truths in a manner reflective of the King - in a gracious and strategic way. Dr. Evans also looks at the necessary qualities in a good candidate which include intellect, education, competency, skill and spiritual beliefs - whether certain issues are non-negotiables, and how a responsible citizen is to research a candidates' position in order to evaluate it against God's Word.

Dr. Tony Evans is one of the country’s most respected leaders in evangelical circles. The first African American to graduate with a doctoral degree from Dallas Theological Seminary, he served as an associate professor in DTS’s pastoral ministries department in the areas of evangelism, homiletics, and black church studies. His daily radio broadcast, The Alternative with Dr. Tony Evans, can be heard on more than five hundred radio stations throughout the United States and in more than forty countries. He has received many honors, including the Father of the Year Award from the Dallas Father of the Year Committee and the Marian Pfister Anshutz Award from the Family Research Center.