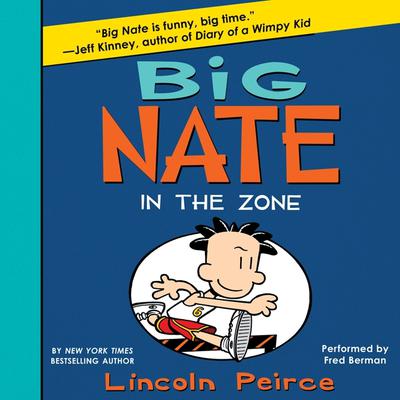 Big Nate: In the Zone

Soon to be an animated series from Nickelodeon!

The sixth Big Nate book in the New York Times bestselling series by Lincoln Peirce! Perfect for fans of the hilarious Diary of Wimpy Kid series.

A laugh-out-loud must-read novel starring the one and only cartooning genius, king of detention, and Cheez Doodle connoisseur, Nate Wright. Nate’s not having the best of luck . . . in fact; he’s not having ANY luck. But with a little boost thanks to Chad’s lucky foot, suddenly good luck is everywhere Nate turns! Nate’s in the zone! But how long will it last?

Includes a sneak peek to the seventh Big Nate novel!

Lincoln Peirce is a New York Times bestselling author, cartoonist, writer, and creator of the comic strip Big Nate, which appears in 250 newspapers nationwide. A fan and collector of classic country music, Peirce also hosts a radio show on WMPG called South by Southwest dedicated to honky tonk and western swing. He lives with his wife and two children in Portland, Maine, and gives lectures to students about cartooning.