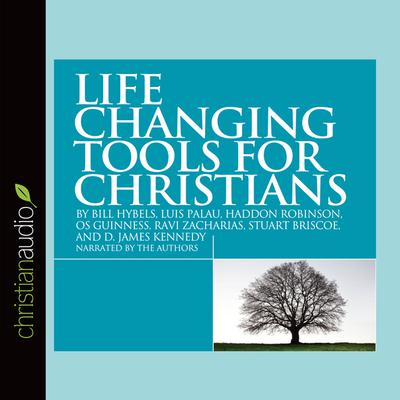 Meet the challenges of modern living and integrate the teachings of Christ with your everyday life!

Being an effective Christian is tough in a world that is increasingly at odds with what you believe. But living at odds with the world is not what Jesus would do. He would meet the people around Him at their point of need and minister to them in a loving and sincere way. He calls you to live this way too. But how are you to do this? And how do you communicate the truth about Jesus in a way that everybody can understand?

When Jesus walked the earth, He didn't always wait for people to come to Him. He rolled up His sleeves and went out to them.

Bill Hybels is the founding and senior pastor of Willow Creek Community Church in South Barrington, Illinois. Willow Creek’s pioneering ministries have made it one of the most attended churches in North America with an outreach that extends worldwide. Hybels has authored more than 20 books, including Fit to Be Tied, Rediscovering Church (with his wife Lynne), Too Busy Not to Pray, Courageous Leadership, Just Walk Across the Room, and Holy Discontent.

Luis Palau leads the Luis Palau Association, a ministry committed to innovative Evangelism throughout the world. He has shared the positive message of the good news gospel with more than one billion people worldwide and has spoken before live audiences in seventy-two countries. He is the author of more than fifty books and booklets in both English and Spanish.

Ravi Zacharias is the founder and chairman of the board of Ravi Zacharias International Ministries, headquartered in Atlanta, Georgia, with additional offices in Canada, Hong Kong, India, Singapore, the United Kingdom, and the United Arab Emirates. Zacharias is a respected speaker and author of many books. He and his wife, Margie, have three grown children.

Stuart Briscoe was born England in 1930, graduated from high school at the age of seventeen, and promptly embarked on a career in banking. He studied law, economics, and accounting in his spare time and eventually became personal assistant to the chief inspector of the bank. As he was doing all this, he was also preaching. For twelve years, preaching and banking kept him fully occupied. Then during the Korean War, he was drafted into the Royal Marines. In 1959, he and his wife left the business world to share in the ministry of the Torchbearers, a youth organization reaching out to the far corners of the world. About ten years later, Elmbrook Church in Brookfield, Wisconsin, asked him to be their pastor. The church has since grown to a weekly attendance in excess of seven thousand and has planted eight sister churches in the Milwaukee area. After thirty years as senior pastor at Elmbrook, he stepped down to assume the role of ministers-at-large on the church staff. The recipient of various honorary doctorates, he has preached in more than one hundred countries and is often invited to minister for pastors, missionaries, and church lay leaders on all continents. In his spare time he likes to read, run, and garden.

Dr. D. James Kennedy (1930-2007) was the founder and senior pastor of Coral Ridge Presbyterian Church in Fort Lauderdale, Florida, for over forty-eight years. By the time of his death, the church’s membership had grown to nearly ten thousand congregants. He was also one of the leading American Christian broadcasters, with his weekly religious television program The Coral Ridge Hour reaching a peak audience of three million viewers. He was inducted into the National Religious Broadcasters association’s Hall of Fame in 2003. Dr. Kennedy died of a heart attack in 2007.