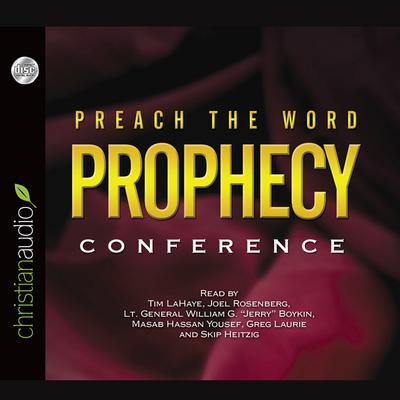 It’s hard to look at the headlines, see the continuing turmoil in the Middle East and the decline of society here in the United States, and not think that we are living in the end times.The prophetic stories of the Bible seem to be happening right in front of our eyes today as we see what is happening around the world. Scripture tells us that we do not know the day nor the hour when Christ will return, but that we should recognize the signs of His imminent return and be prepared.You’ll get keen insight into what the Bible has to say about the last days from some of the top Bible prophecy scholars in America, including Tim LaHaye, Joel Rosenberg, and Lt. Gen. William Boykin (ret.). You’ll also learn how we as Christians should approach these final days before the return of Jesus Christ.This conference is not just for scholars, but for everyone who sees what is happening in the world today and wants to know more about what is in store as Christ’s return draws near.

Greg Laurie is the pastor of Harvest Christian Fellowship in Riverside, California, one of the largest churches in the United States. He is the author of over forty books and lives in southern California with his wife.

William G. Boykin spent thirty-six years in the United States Army, many of them as an original member of Delta Force, the world’s premier Special Operations unit. His life reads like an action-adventure film; he helped capture Panamanian dictator Manuel Noriega, hunted notorious drug lord Pablo Escobar, and has served in Vietnam, Iran, Mogadishu, Iraq, and Afghanistan, not to mention a tour with the CIA. Today he is an ordained minister who is passionate about encouraging Christians to become warriors in God’s kingdom.

Mosab Hassan Yousef is the son of Sheikh Hassan Yousef, a founding leader of Hamas, an internationally recognized terrorist organization responsible for countless suicide bombings and other deadly attacks against Israel. He is the author of Son of Hamas: A Gripping Account of Terror, Betrayal, Political Intrigue, and Unthinkable Choices, a New York Times bestseller.