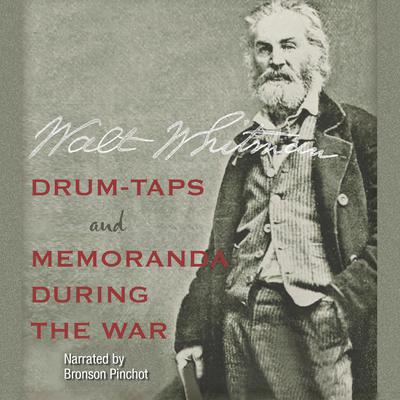 Drum-Taps and Memoranda During the War

Walt Whitman experienced first-hand the ravages of the Civil War as a volunteer nurse in the hospitals of Washington DC. During that time, he filled notebooks with "impromptu jottings" that became the basis of two works: Drum-Taps, a collection of seventy-one poems, and

Memoranda during the War, an intimate diary of his experience tending to the sick and dying during the war. These two historical works are presented here, narrated by acclaimed actor Bronson Pinchot.

“A little volume of less than a hundred pages, full of warlike passion, singularly blended with as much sadness perhaps as was ever printed in a like space.” —Galaxy on Drum-Taps, December 1866
“Whitman not only possesses an almost photographic accuracy of observation, a masculine directness of expression, and real tenderness of feeling, but he sometimes hits upon an original epithet which illuminates a page of prosaic details.” —The North American Review on Drum-Taps, January 1867
“The brief, bare sketches, uncommon and unimproved, as they are, make the book truly one of surpassing human interest—an interest peculiar to itself—and such as no other book we should read possesses…No poet of any clime—not even Shakespeare, Scott, or Southey—ever depicted the woes of war so powerfully and touchingly as Walt Whitman does, as it were, with a few hurried pencil strokes, in these memoranda.” —Sunderland Weekly Times on Memoranda during the War, 7 July 1876
“Listening to this audiobook should remind us that it doesn’t matter which century or country we live in—war is indeed hell. In this case, we are talking about the author’s descriptions of field hospitals in Washington, DC, during the Civil War, but the horror and waste of humanity are achingly current. Narrator Bronson Pinchot…create[s] an ethereal mood with his economical pronunciations and sharp diction.” —AudioFile

Walt Whitman (1819-1892) was the son of a carpenter. His formal schooling ended at age eleven, when he was apprenticed to a printer in Brooklyn. He spent the next two decades as a printer, freelance writer, and editor in New York. In 1855, at his own expense, he published the first edition of Leaves of Grass, which would mark him as the major poetic voice of an emerging America. Whitman would go on expanding and revising it for the rest of his life, with the final edition appearing in 1892, the year of his death.