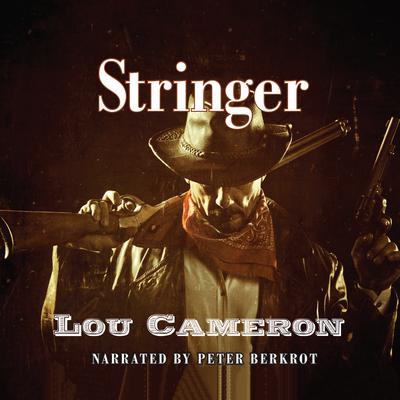 For once they were sending Stringer on a nice easy assignment. All he had to do was scribble out a story about an outlaw gunned down fifty years before. As far as Stringer was concerned, it was an ideal excuse to make a trip back to his hometown in the Sierras. But it's a homecoming of hot lead and hotter ladies. Someone wants Stringer dead almost as bad as the local females want him alive. Stringer doesn't know why so much trouble is suddenly finding him, but he suspects it must be might ugly for the town to welcome a hometown boy with double dealing and easy death.

“With a fast pace and a friendly drawl, Peter Berkrot tells the story of cowboy newsman Stringer…Berkrot is perfect as Stringer, the ultimate hero.” —AudioFile

Lou Cameron (1924–2010) was a prolific American novelist with over three hundred titles to his credit, from adventure, science fiction, crime, and war to movie novelizations, Westerns, and more. In addition to the Stringer Western series, he created the Longarm character, writing under the name Tabor Evans, as well as the Renegade series, writing as Ramsay Thorne. Cameron won the Western Writers of America Spur Award for Best Novel in 1976, and he was also an accomplished comic book illustrator.