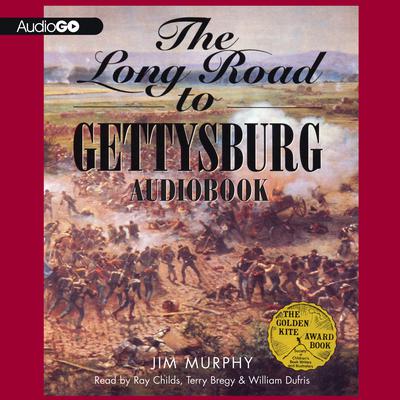 The Long Road to Gettysburg

On June 3, 1863, nineteen-year-old Confederate lieutenant John Dooley prepared to march on Gettysburg, Pennsylvania. Thomas Galway, a seventeen-year-old corporal in the Union army, waited for the battle to begin.

Drawing on the written accounts of these young soldiers, Murphy traces the circumstances leading to the dramatic battle of Gettysburg and Lincoln’s historic address at the dedication of the National Cemetery at Gettysburg.

“Excerpts from the diaries of two young officers, Lt. John Dooley of the Confederacy and Cpl. Thomas Galway of the Union army, are at the heart of this compelling account of the Civil War’s bloodiest battle. Expertly blending details about the battle and each side’s plans with the diaries, Murphy conveys all of the tension, tedium, and excitement of the battlefield.” —Publishers Weekly
“The three narrators, Ray Childs, Terry Bregy, and William Dufris, do an admirable job.” —AudioFile
“Murphy’s intriguing book presents the story of the battle from the points of view of two actual participants...The firsthand accounts, drawn from Dooley’s and Galway’s own writings, give the narrative immediacy and personalize the horrors of battle...An important addition to the Civil War shelf.” —Booklist (starred review)
“The excellent use of quotes and descriptions from Dooley and Galway’s journals brings authenticity and immediacy to the narrative. By focusing on these two ordinary soldiers, readers get a new perspective on this decisive and bloody battle. A first-rate addition to Civil War collections.” —School Library Journal (starred review)
“Balancing tactical and historical descriptions of the bloodiest battle of the Civil War with the firsthand diary accounts of two young soldiers, one Union and one Confederate, Jim Murphy’s title is solidly narrated by Ray Childs, Terry Bregy, and William Dufris, each lending his talent to a different section of the text. The use of different voice actors for the narration is especially effective in helping listeners differentiate the Union and Confederate points of view, with snippets of snare drum music separating the passages to further reinforce the shifts in viewpoint...Listeners will get a sense of the emotion, pain, and fatigue experienced by the two soldiers through the performances.” —School Library Journal (audio review)