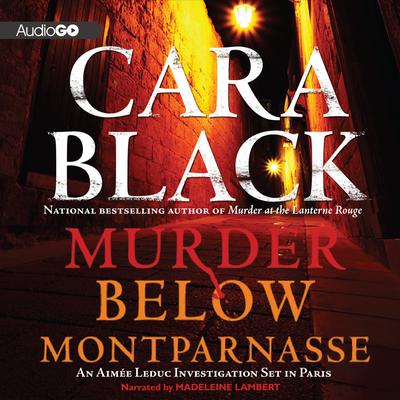 An Entertainment Weekly “Must Read”, March 2013

A long-lost Modigliani portrait, a grieving brother's blood vendetta, a Soviet secret that's been buried for eighty years—Parisian private investigator Aim├®e Leduc's current case is her most exciting one yet.

When Aim├®e's long-term partner and best friend Rene leaves their detective agency for a new job in Silicon Valley, Aim├®e knows she can handle the extra workload. At least, that what she tells herself … repeatedly.

But all bets are off when Yuri Volodya, a mysterious old Russian man, hires Aim├®e to protect a painting. By the time she gets to his Montparnasse atelier, the precious painting has already been stolen, leaving Aim├®e smelling a rat. The next day, Yuri is found tortured to death in his kitchen. To top it all off, it looks like Aim├®e isn't the only one looking for the painting. Some very dangerous people are threatening her and her coworkers, and witnesses are dropping like flies. Now Aim├®e has to find the painting, stop her attackers, and figure out what her long-missing mother, who is on Interpol's most wanted list, has to do with all this—fingers crossed she wasn't Yuri's murderer, despite clues pointing in that direction.

“Aimée Leduc, the appealing sleuth in this series…is always zipping around on her pink Vespa, carrying out some ‘quick and dirty’ computer security job. But she keeps up a running commentary on whatever quartier of the city her work takes her to. Here it’s the unfashionable backside of Montparnasse…This unassuming neighborhood is a rich one for the purposes of a plot that hangs on a Modigliani canvas and involves Russian émigrés and Surrealist artists, including some who live on in legend.” —New York Times Book Review
“Lighter than in most other Euro-noir. After all, this is Paris…The spice in this tale, set in 1998, involves a long-hidden, newly stolen Modigliani that Leduc is hired to retrieve. Before she can even begin hunting, her client is killed…Fortunately, Leduc has a network of loyal friends to aid in her escapades. Pity the knife-wielding villain who offends that infallible sense of style.” —Wall Street Journal
“Black is an old pro with an ear for language and dialogue and a gift for knowing just when to pop the next surprise.” —Denver Post
“Consistently entertaining…Plus, there’s a surprise at the end of the book that promises some very interesting times ahead.” —Seattle Times
“[Has] a lengthy, well-developed subplot. Allusions to Modigliani, Picasso, Cocteau, Man Ray, and Duchamp help evoke 1920s Paris.” —Publishers Weekly
“Madeleine Lambert brings a clear voice and authentic French accent to investigator Aimée Leduc and her compatriots…The plot, which is perfectly suited to the audio format, involves the black market art world, a long-lost portrait of Lenin by Modigliani, and Aimée’s long-missing mother. Lambert moves the narration along at a snappy pace. She convincingly ramps up the drama of the heroine’s escapades as she chases dangerous shadows down the cobblestoned alleyways of Paris on her trusty Vespa.” —AudioFile
“Brisk, engaging…Another great Aimée Leduc read; fans will be intrigued by the new developments.” —Library Journal