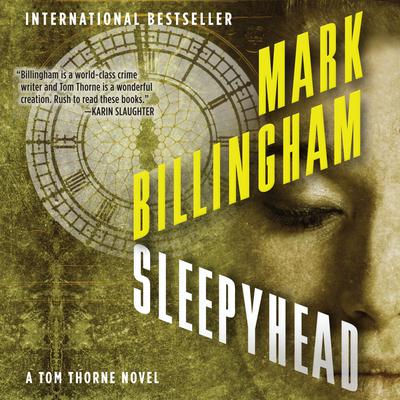 Alison Willetts is unlucky to be alive. She has survived a stroke, deliberately induced by a skilful manipulation of pressure points on the head and neck. She can see, hear and feel and is aware of everything going on around her, but is completely unable to move or communicate. Her condition is called Locked-In Syndrome. In leaving Alison Willetts alive, the police believe the killer made his first mistake.

Then D.I. Tom Thorne discovers the horrifying truth; it isn’t Alison who is the mistake, it’s the three women already dead. “An appropriate margin of error” is how their killer dismisses them, and Thorne knows they are unlikely to be the last. For the killer is smart, and he’s getting his kicks out of toying with Thorne as much as he is pursuing his sick fantasy. Thorne knows immediately he’s not going to catch the killer with simple procedure. But with little more than gut instinct and circumstantial evidence to damn his chief suspect, anesthetist Jeremy Bishop, his pursuit of him is soon bordering on the unprofessional. Especially considering his involvement with Anne Coburn, Alison’s doctor and Jeremy’s close friend.

“A sensational debut.” —Globe and Mail (Toronto)
“Who would have thought a stand-up comedian could write a British police procedural as good as those produced by crime queens Elizabeth George and Ruth Rendell?” —USA Today
“A new twist to the twisted mind of a psychopath—an exciting debut novel.” —Baltimore Sun
“Billingham’s turn as a novelist might be his most successful career move.” —Pittsburg Tribune-Review
“Billingham’s flawless plotting and the steadily increasing sense of fear combine to make this one of the best debut novels of the year.” —Rocky Mountain News
“Brilliantly conceived and superbly plotted, with complex characters, deft twists, and an ending that’s both shocking and oppressive. A must-read.” —Booklist (starred review)