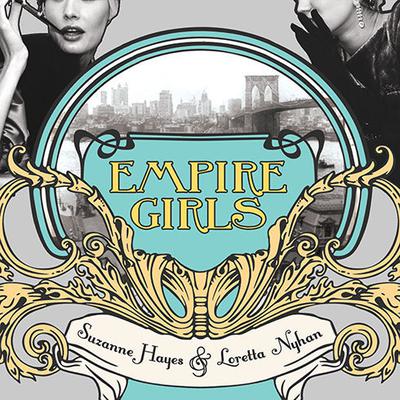 By Suzanne Hayes and Loretta Nyhan
Read by Meredith Mitchell

Ivy and Rose Adams may be sisters, but they're nothing alike. Rose, the eldest, is the responsible one, while Ivy is spirited and brazen. After the unexpected death of their father, the women are left to reconcile the estate, but they make a shocking discovery: not only has their father left them in financial ruin, but he has also bequeathed their beloved family house to a brother they never knew existed. With only a photograph to guide the way, Ivy and Rose travel to New York City, determined to find this mysterious man and reclaim what is rightfully theirs.
Once in New York, temptations abound at every turn, and soon the sisters are drawn into the glitzy underbelly of Manhattan, where they must overcome their differences and learn to trust each other if they're going to survive in the big city and find their brother. Filled with unforgettable characters and charm, Empire Girls is a love letter to 1920s New York and a captivating story of the unspoken bond between sisters.

This novel of sisterhood should have wide appeal. —Library Journal

Suzanne Palmieri is coauthor of the novel I’ll Be Seeing You (as Suzanne Hayes), and her essays have been published online in Life Learning Magazine and Full of Crow’s On the Wing section. She lives with her husband and three daughters in New Haven, Connecticut.

Loretta Nyhan lives in the Chicago area with her husband and sons. She is the author of The Witch Collector and coauthor with Suzanne Hayes of I’ll Be Seeing You.