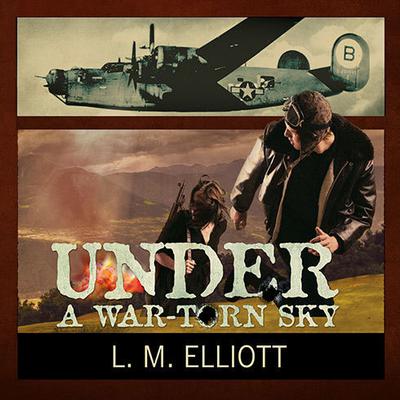 Under a War-Torn Sky

When Henry Forester is shot down during a bombing run over France,the World War II pilot finds himself trapped behind enemy lines. In constant danger of discovery by German soldiers, Henry begins a remarkable journey to freedom. Relying on the kindness of strangers, Henry moves from town to town—traveling by moonlight, never asking questions or even the names of the people who help him along the way. Each day brings him closer to home, yet every step in enemy territory invites new dangers. Even as Henry fights for his own life, he quickly grows to realize the peril that surrounds all of the French people and to admire the courage of the freedom fighters who risk death to protect him. Suspenseful and achingly true, this critically acclaimed and deeply beloved novel explores the heartbreak of war, the strength of the human spirit, and one young man's struggle to protect the things he loves.

An emotional, action-packed gem! —Kliatt Starred Review
“It’s packed with action, intrigue, and suspense, but this novel celebrates acts of kindness and heroism without glorifying war…{There is] chilling realism. Small details add both credibility and appeal to this gripping adventure, inspired by stories told to the author by her father.” —Booklist
“This is a gritty, unblinking look at the horrors that the Nazis visited upon France during the occupation. Hank is a smart, strong, and courageous character who survives under the worst of conditions…Hank is almost too good to be true. But the real heroes of the story are the French civilians who help Hank and many Allied soldiers like him to escape from the Nazis…The ending seems rather romanticized, but the author’s afterword explains that the story is based on some of her own father’s experiences. Readers with an interest in warfare and adventure will find a sure winner here. Pair this novel with Don Wulffson’s Soldier X for a comparison with life as a young German soldier.” —School Library Journal
“An emotional, action-packed gem!..Elliot paints a picture of war that we don’t often see, one that is away from the battles, showing life and death in a war-ravaged land…This novel would be an excellent addition to a unit on WW II. It would also make a good choice for literature circles or large group discussions. It engages the reader quickly and takes him or her on an engrossing thrill ride…Exceptional book, recommended for junior and senior high school students.” —Kliatt
“Narrator Elizabeth Wiley impeccably inhabits the young man as he copes with this terrifying situation…Wiley’s true-to-life German and French accents, characterizations, and performances of moving hymns and war songs add to the atmosphere of this fine novel. When Forrester is finally rescued, conversations with the Resistance are often in French, giving young listeners the opportunity to learn a few words. Wiley deftly presents a range of emotions; in particular, her evocation of personal terror is realistic and nerve-racking. The epilogue reveals that the author based the story on her own father’s wartime experiences. Winner of the AudioFile Earphones Award.” —AudioFile

L. M. Elliott is the author of several critically acclaimed novels, including Flying South, winner of the Joan G. Sugarman Children’s Literature Award. Under a War-Torn Sky was an NCSS/CBC Notable Book in Social Studies, a Jefferson Cup Honor Book, and the winner of the Borders Original Voices Award. Its sequel, A Troubled Peace, was also an NCSS/CBC Notable. Annie, between the States, was an IRA Teachers’ Choice and NYPL Book for the Teen Age; and Flying South was a Bank Street College Best Children’s Book selection.