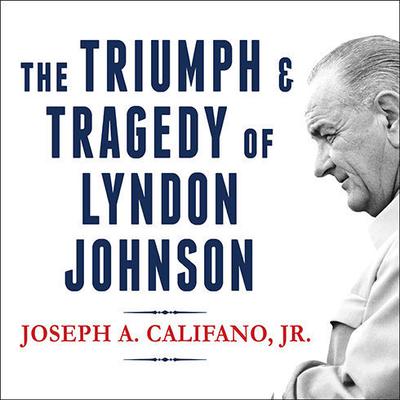 The Triumph and Tragedy of Lyndon Johnson: The White House Years

By Joseph A. Califano , Jr.
Read by Norman Dietz

President Lyndon Johnson was bigger than life—and no one who worked for him or was subjected to the "Johnson treatment" ever forgot it. As Johnson's "Deputy President of Domestic Affairs," Joseph A. Califano's unique relationship with the president greatly enriches our understanding of our thirty-sixth president. Califano shows listeners LBJ's commitment to economic and social revolution, and his willingness to do whatever it took to achieve his goals. He uncorks LBJ's legislative genius and reveals the political guile it took to pass laws in civil rights, poverty, immigration reform, health, education, environmental protection, consumer protection, the arts, and communications. A no-holds-barred account of Johnson's presidency, The Triumph and Tragedy of Lyndon Johnson is an intimate portrait of a president whose towering ambition for his country and himself reshaped America—and ultimately led to his decision to withdraw from the political arena in which he fought so hard.

Califano, who went on to become secretary of Health, Education and Welfare, has written an intimate, balanced and basically sympathetic portrait of the 36th president. —Publishers Weekly
“A revealing anecdote-laden work…Califano…can really write. Four stars.” —USA Today
“Wonderful book…What makes this memoir of…his Presidency stand out is its vividness. Johnson leaps out of the pages in all his raw and earthy glory.” —New York Times Book Review
“A joy to read. A walk through the [most tumultuous] half-decade from 1964 to 1969…Oh what anecdotes. Johnson leaves you breathless, disbelieving, aghast…Recommended without reservation.” —Washington Post Book World
“As close as we’ll ever come to seeing Johnson in action with our mind’s eye, thanks to Califano’s descriptions and care… Not many will give you a better tour of political Washington or such an intimate look at the big, flawed man who was Lyndon B. Johnson.” —Los Angeles Times
“New light is shed on the deterioration of the president’s relationship with vice-president Hubert Humphrey, his folly in nominating crony Abe Fortas as Supreme Court Justice, his contempt for Richard Nixon and Robert Kennedy, and his turning to religion in crises. One of the better White House ‘palace guard’ memoirs of late—a compassionate, blessedly self-effacing tribute to a president who ‘put the thumb of government on the scale for the vulnerable among us.’” —Kirkus Reviews
“Califano’s fascinating peek behind the screen at LBJ’s presidency is filled with delicious detail about one of the most controversial political figures of the last century. Narrator Norman Dietz uses clear diction and a measured pace…This is a worthwhile listen with broad audience appeal, especially given today’s social changes and political climate —AudioFile

Joseph A. Califano Jr. is the founder of The National Center on Addiction and Substance Abuse at Columbia University (CASAColumbia). He served as US Secretary of Health, Education, and Welfare and has written several books. He lives in Westport, Connecticut.