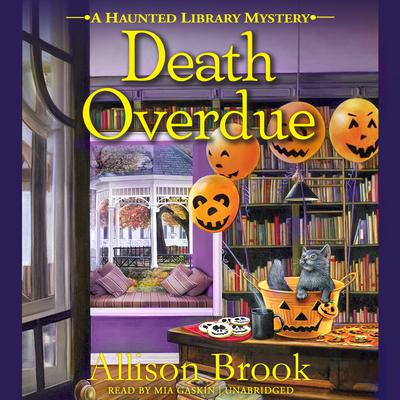 For fans of Miranda James and Jenn McKinlay comes an enthralling series debut featuring a librarian who solves mysteries with the help of a ghost in the stacks.

Carrie Singleton is just about done with Clover Ridge, Connecticut, until she is offered a job as the head of programs and events at the spooky local library, complete with its own librarian ghost. Her first major event is a program presented by a retired homicide detective, Al Buckley, who claims he knows who murdered Laura Foster, a much-loved part-time library aide who was bludgeoned to death fifteen years earlier. As he invites members of the audience to share stories about Laura, he suddenly keels over and dies.

The medical examiner reveals that poison is what did him in, and Carrie feels responsible for having gone forward with the program despite pushback from her director. Driven by guilt, Carrie is determined to discover who murdered the detective, convinced it’s the same man who killed Laura all those years ago. Luckily for Carrie, she has a friendly, knowledgeable ghost by her side. But as she questions the shadows surrounding Laura’s case, disturbing secrets come to light, and with each step Carrie takes, she gets closer to ending up like Al.

“Readers of Miranda James, Jenn McKinlay, Carolyn Hart, Nancy Atherton, and Carolyn Haines will be delighted with this paranormal debut.” —Library Journal (starred review)
“A ‘spirited’ start to a fun new mystery series that kept me guessing to the end. Ghosts, libraries, and cats—all my favorite cozy things fill the pages of Death Overdue. —Ali Brandon, author of the Black Cat Bookshop mysteries
“A charming cozy town, a spunky heroine, and a mystery that grabs you from page one. Death Overdue is a delight!” —Peg Cochran, author of Dead and Berried
“Books and ghosts…what could be more fun! Add two plucky librarians (one who just happens to be dead), throw in a baffling murder, and you’ve got the perfect combination that keeps readers turning pages.” —Kylie Logan, author of Gone with the Twins

Allison Brook is a former Spanish teacher who now writes mysteries, romantic suspense, and novels for young readers. She loves traveling, reading, knitting, doing Sudoku, and visiting with her grandchildren. She lives on Long Island with Sammy, her feisty red cat.