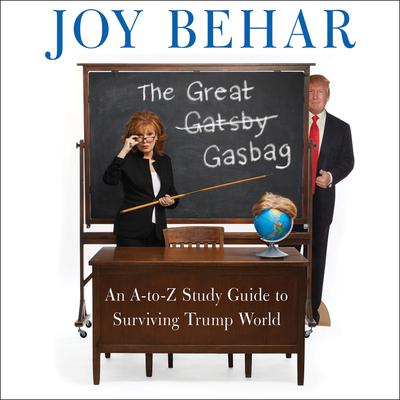 One of our most beloved comedians, the brilliantly witty and outspoken star of The View, hits the most unpopular President ever elected where it hurts—and makes us laugh and cheer—in this hilarious alphabetical guide to everything that’s wrong with the "Orange One," Donald Trump.

Put down the knife, lock away the gun, lay aside the noose, Joy Behar is here to save you from suicide as she hot walks you through the next four years (two if we are lucky, less if liberal dreams come true). Besides despair, the sane response to the insanity in the White House is laughter. On her hit ABC daytime show The View, Joy has been blunt in her condemnation of the comb over-in-chief, and her words have electrified and inspired millions in the resistance for whom #notmypresident has become a rallying cry.

The Great Gasbag is Joy’s answer to the hell that is the Trump Orange House. Structured as an A-Z guide (G is for Gold . . . en shower; P is for Pence and pussy-grabbing; T is for Tweets; Twits, and Twats, etc.), Joy, joined by New York Times bestselling humor author Larry Amoros, offers much-needed doses of levity and humor for everyone determined to #resist. With a major network television profile and a social media audience in the millions, this fearlessly confident star has a powerful platform to entertain Americans of all stripes—from Never Trumpers to fired-up progressives—as she takes on the worst president since . . . well, since ever.

“Behar is seriously funny, and her knack of making the serious funny will be devoured by her fans and debunked by Trump’s. And that’s where the real fun comes in.” —Booklist

Joy Behar, cohost of ABC’s The View, is among today’s leading comic talents. She earned an MA in English education from the State University of New York at Stony Brook and began her career in teaching before she turned to stand-up comedy. She has performed in her own HBO special and won a CableACE Award for her voice work on Dr. Katz. Joy has appeared on a number of television talk shows, in films, and on stage. She writes a monthly advice column in Good Housekeeping and is the author of Joy Shtick, or, What Is the Existential Vacuum and Does It Come With Attachments?