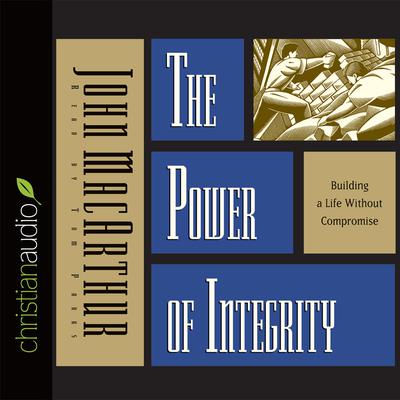 Power of Integrity: Building a Life Without Compromise

We live in a society that has largely abandoned moral standards and Christian principles. Unkept campaign promises, false advertising, exaggerated tax exemptions, employee theft--compromise has become a way of life. Such moral concession has even invaded the church. Faced with an opportunity to proclaim Christ to unbelievers, we feel intimidated and keep silent. Or we water down God's Word on ethical issues at work or in our community to avoid rejection. Too often we prefer hypocrisy to integrity.But God longs for His people to be different--to maintain a commitment to His standards, no matter what the cost. Is consistent obedience to God--integrity--attainable in this world of sin and self? By the grace and power of God, yes!One of the nation's most respected pastors points the way to persevering character in Christ. Drawing from scriptural examples of godly men who modeled integrity during severe testing, MacArthur makes a compelling case for the impact a man or woman of integrity can have in our world.

John MacArthur is a popular author and conference speaker and has served as pastor-teacher of Grace Community Church in Sun Valley, California, since 1969. In addition to producing daily radio programs for nearly 2,000 English and Spanish radio outlets worldwide, Grace to You distributes books, software, audiotapes, and CDs by John. He is president of the Master’s College and Seminary and has written hundreds of books and study guides, each one biblical and practical. Bestselling titles include The Gospel according to Jesus, The Truth War, The Murder of Jesus, Twelve Ordinary Men, Twelve Extraordinary Women, and The MacArthur Study Bible, a 1998 ECPA Gold Medallion recipient.

John MacArthur is the pastor-teacher of Grace Community Church in Sun Valley, California, where he has served since 1969. He is known around the world for his verse-by-verse expository preaching and his pulpit ministry via his daily radio program, Grace to You. He has also written or edited nearly four hundred books and study guides. MacArthur serves as the president of the Master’s Seminary and Master’s University. He and his wife, Patricia, live in Southern California and have four grown children.

Tom Parks is an AudioFile Earphones Award-winning narrator who has also been a finalist for the prestigious Audie Award for best narration. He has been involved in recording audiobooks and voice-overs for over thirty years and through an eclectic range of projects. In addition to performing and directing, he is also an active musician, drumming in musical theater productions in the Midwest, and is in demand as a conference speaker.