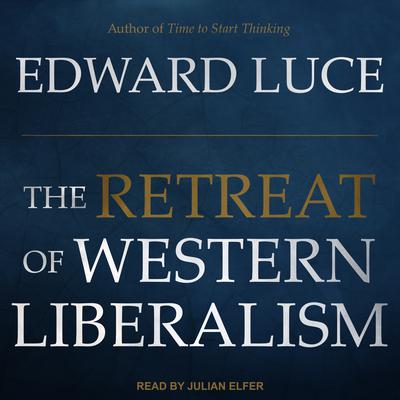 The Retreat of Western Liberalism

In his widely acclaimed book Time to Start Thinking, Financial Times chief U.S. columnist and commentator Edward Luce charted the course of America's relative decline, proving to be a prescient voice on our current social and political turmoil.

In The Retreat of Western Liberalism, Luce makes a larger statement about the weakening of western hegemony and the crisis of liberal democracy—of which Donald Trump and his European counterparts are not the cause, but a terrifying symptom. Luce argues that we are on a menacing trajectory brought about by ignorance of what it took to build the West, arrogance towards society's economic losers, and complacency about our system's durability—attitudes that have been emerging since the fall of the Berlin Wall. We cannot move forward without a clear diagnosis of what has gone wrong.

Combining on-the-ground reporting with intelligent synthesis of the literature and economic analysis, Luce offers a detailed projection of the consequences of the Trump administration, the rise of European populism, and a forward-thinking analysis of what those who believe in enlightenment values must do to defend them from the multiple onslaughts they face in the coming years.

Edward Luce provides a terrifying view of the challenges facing the West. We have to hope that his prophecies are self denying-something that is more likely if his penetrating analysis gets the wide attention it richly deserves. —Lawrence Summers

Edward Luce graduated with a degree in politics, philosophy, and economics from Oxford University. He worked as a speech writer for the treasury secretary in the Clinton administration, worked as the South Asia bureau chief for the Financial Times, and is based in Washington DC as the Financial Times Washington columnist and commentator. He was formerly its Washington bureau chief. He is also the author of In Spite of the Gods: The Rise of Modern India and Time to Start Thinking: America in the Age of Descent.