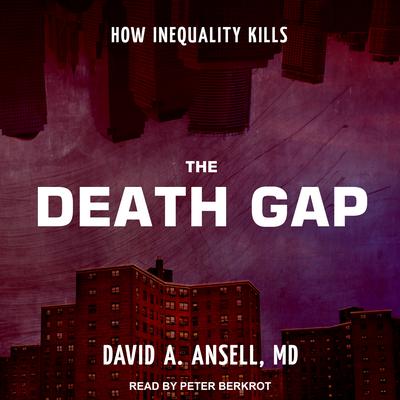 The Death Gap: How Inequality Kills

By David A. Ansell, MD, MPH
Read by Peter Berkrot

David Ansell has spent nearly four decades as a doctor at hospitals serving some of the poorest communities in Chicago, and has witnessed firsthand the lives behind these devastating statistics. In The Death Gap, he gives a grim survey of these realities, drawn from observations and stories of his patients.

While the contrasts and disparities among Chicago's communities are particularly stark, the death gap is truly a nationwide epidemic—as Ansell shows, there is a thirty-five-year difference in life expectancy between the healthiest and wealthiest and the poorest and sickest American neighborhoods. If you are poor, where you live in America can dictate when you die. It doesn't need to be this way; such divisions are not inevitable.

Ansell calls out the social and cultural arguments that have been raised as ways of explaining or excusing these gaps, and he lays bare the structural violence that is really to blame. The Death Gap outlines a vision that will provide the foundation for a healthier nation—for all.

This moving study delivers the harsh truth about the ways that racism infects our nation's health care system, and it does so with passion and eloquence. One comes away from Death Gap feeling inspired to act, and that's a rare and wonderful accomplishment. —Beryl Satter, author of Family Properties

David A. Ansell, MD, MPH, is a Chicago-based physician and health activist. He has been an internal medicine physician since training at Cook County Hospital in the late 1970s where he spent seventeen years holding a number of positions including chief of general medicine / primary care. After leaving County, he spent ten years as chair of the Department of Internal Medicine at Mount Sinai Hospital located in one of the poorest communities in Chicago. Now chief medical officer at Rush University Medical Center, he also sees patients and teaches. Since coming to Chicago to train at Cook County Hospital, he has dedicated his career to fighting health inequity by building programs to address and eliminate these disparities. His work with others has led to the end of “patient dumping” in the United States, one of the first cancer screening programs in America aimed at addressing the Black:White breast cancer mortality disparity, the creation of the most prominent health disparity research and intervention center in Chicago, and the creation of the Metropolitan Chicago Breast Cancer Taskforce, a not-for-profit dedicated to the elimination of breast cancer mortality disparity. In his spare time he reads, gardens, and exercises. He volunteers as a doctor at a Chicago free clinic and has participated in ongoing medical missions to the Dominican Republic and Haiti. He is married to a doctor and has two children.