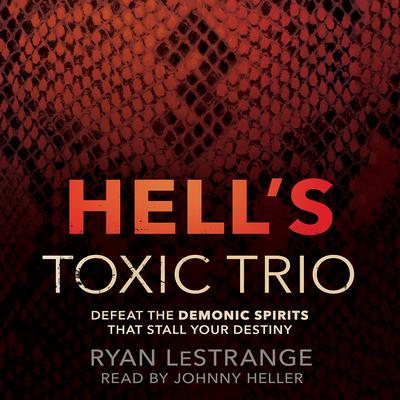 There is a toxic trio of demonic spirits that consort to abort plans, destroy destinies, and shipwreck faith. But Christians don’t have to live under their thumb. Hell’s Toxic Trio will teach believers how to properly identify these spirits and conquer them. The Jezebel spirit, the spirit of Python, and the religious spirit—the toxic trio, have unique functions, but they all have the same goal: to quench the anointing on a person’s life and fight the spiritual progress of a church or ministry. This book peels back the curtain to expose how the spirits conspire to enact Satan’s agenda on the earth. In addition to helping readers learn to quickly identify the activity of these supernatural forces, this book offers believers the tools to overcome. Christians are already in a strong position of authority over these demonic forces. This book will arm believers with the tools to rise above these spirits and live in victory!FEATURES AND BENEFITS: ·Contains activations to mobilize Christians in warfare against these anti-anointing demons ·Includes declarations to help readers break these powers and live in freedom

Ryan LeStrange is an apostolic leader and prophetic voice. The apostolic call on his life has led him to build multiple ministries in various geographical locations, the foremost being Ryan LeStrange Ministries. Ryan, a modern-day revivalist, moves strongly in the power of God as he travels the globe igniting revival fires. His conferences and gatherings are alive with prophetic declaration, miracles, healings, and powerful preaching. Ryan is the founder and apostolic leader of TRIBE Network, a global network of ministries. He is also cofounder of AwakeningTV.com, a media channel created to host revival-inspired services featuring ministers and messages both past and present. Ryan has authored several books, including Releasing the Prophetic; Revival Hubs Rising, coauthored with Jennifer LeClaire; Overcoming Spiritual Attack; and Supernatural Access. Ryan and his wife, Joy, have a son, Joshua, and reside in Virginia.