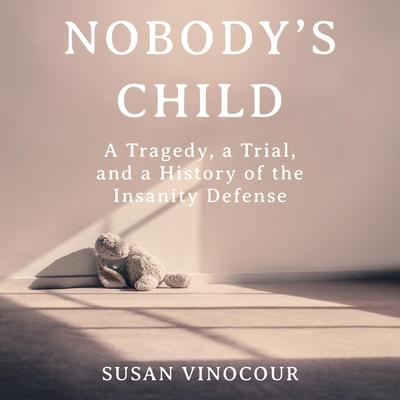 Nobody's Child: A Tragedy, a Trial, and a History of the Insanity Defense

A powerful and humane exploration of the history of the "insanity defense," through the story of one poignant case.

When a three-year-old child was found with a head wound and other injuries, it looked like an open-and-shut case of second-degree murder. Psychologist and attorney Susan Vinocour agreed to evaluate the defendant, the child's mentally ill and impoverished grandmother, to determine whether she was competent to stand trial. Even if she had caused the child's death, had she realized at the time that her actions were wrong or was she legally "insane"?

What followed was anything but an open-and-shut case. Nobody's Child traces the legal definition of "insanity" back to its inception in Victorian Britain nearly two hundred years ago, from when our understanding of the human mind was in its infancy, to today, when questions of race, class, and ability so often determine who is legally "insane" and who is criminally guilty. Vinocour explains how "competency" and "insanity" are creatures of a legal system, not of psychiatric reality, and how, in criminal law, the insanity defense has too often been a luxury of the rich and white.

“Vinocour shows the injustices of this sliver of our legal system meant to bring together psychiatric research and criminal law.” —New York Times Book Review
“In this moving, well-researched account of the insanity defense…Vinocour does a fine job explaining the defense in layman’s terms. Sterling prose helps make this a page-turner.” —Publishers Weekly (starred review)
“A satisfying courtroom drama that hits the sweet spot between good storytelling and sharp legal analysis.” —Kirkus Reviews

Susan Nordin Vinocour is a retired clinical and forensic psychologist, a former prosecutor, and a former associate professor of psychiatry at the University of Rochester School of Medicine. She lives in Pittsford, New York.