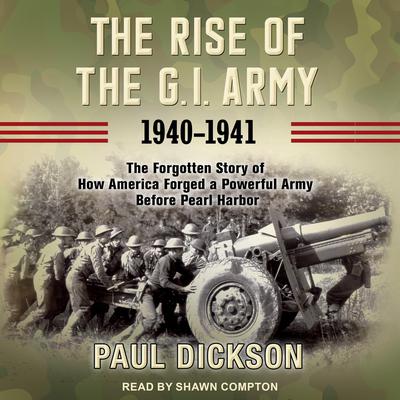 The Rise of the G.I. Army, 1940-1941: The Forgotten Story of How America Forged a Powerful Army Before Pearl Harbor

A Washington Independent Review of Books Pick of 2020

The story of America's astounding industrial mobilization during World War II has been told. But what has never been chronicled before Paul Dickson's The Rise of the G. I. Army, 1940-1941 is the extraordinary transformation of America's military from a disparate collection of camps with dilapidated equipment into a well-trained and spirited army ten times its prior size in little more than eighteen months. From Franklin Roosevelt's selection of George C. Marshall to be Army Chief of Staff to the remarkable peace-time draft of 1940 and the massive and unprecedented mock battles in Tennessee, Louisiana, and the Carolinas by which the skill and spirit of the Army were forged and out of which iconic leaders like Eisenhower, Bradley, and Clark emerged; Dickson narrates America's urgent mobilization against a backdrop of political and cultural isolationist resistance and racial tension at home, and the increasingly perceived threat of attack from both Germany and Japan.

An important addition to American history, The Rise of the G. I. Army, 1940-1941 is essential to our understanding of America's involvement in World War II.

“Thoroughly researched and very readable, Dickson’s brilliant The Rise of the G.I. Army is destined to be the new standard for this period.” —Patrick K. O’Donnell, author of Dog Company and The Unknowns
“Reading about the birth of the country’s citizen Army before World War II is a profoundly heartening experience. With all they are facing today, Americans need Dickson’s reminder of this momentous accomplishment.” —New York Times Book Review
“The best history is character-driven, and in this Mr. Dickson excels…An indispensable account.” —Wall Street Journal
“A deeply researched and well-written account…This is military history at its absolute finest…Highly recommended!” —Douglas Brinkley, New York Times bestselling author