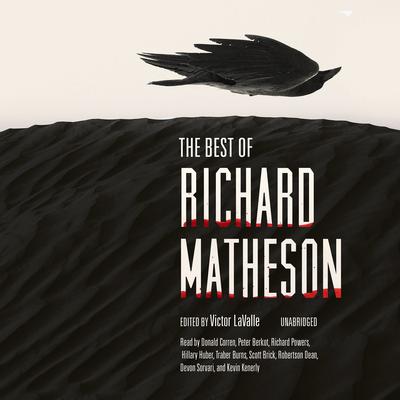 The Best of Richard Matheson

The first career retrospective of terrifying stories by “one of the greatest writers of the twentieth century” (Ray Bradbury), as selected by award-winning author Victor LaValle

Among the greats of twentieth-century horror and fantasy, few names stand above Richard Matheson. Though known by many for novels like I Am Legend and his sixteen Twilight Zone episodes, Matheson truly shines in his chilling, masterful short stories. Since his first story appeared in 1950, virtually every major writer of science fiction and fantasy has fallen under his influence, including Stephen King, Neil Gaiman, Peter Straub, and Joe Hill, as well as filmmakers like Stephen Spielberg and J. J. Abrams.

Matheson revolutionized horror by taking it out of Gothic castles and strange cosmos and into the darkened streets and suburbs we recognize as our own. He infused tales of the fantastic and supernormal with dark explorations of human nature, delving deep into the universal dread of feeling alone and threatened in a dangerous world. The Best of Richard Matheson brings together his greatest hits as chosen by Victor LaValle, an expert on horror fiction and one of its brightest talents, marking the first major overview of Matheson’s legendary career.

“Make[s] a strong case for Richard Matheson as the most influential American writer of ‘fantastika’ between Lovecraft and Stephen King.” —Washington Post
“Matheson…was the master of a particular kind of story in which puzzlement turns gradually to acceptance of an impossible-seeming reality and ultimately to full-blown panic…Matheson’s horror is for grown-ups, those who have lost the easy credulity of the very young…He’s an ideal writer to read right now, because—as grown-ups know—we live in unbelievable times.” —New York Times Book Review
“[A] welcome, Halloween-timed retrospective collection…Only Matheson could make you believe in these preposterous-seeming stories. And leave you wanting more.” —Los Angeles Times
“Tension and scares aplenty…These chilling page-turners still hold up, serving as an excellent starting point for a new generation of readers.” —Kirkus Reviews
“Richard Matheson is one of the giants of genre writing, and his talents are on full display…This collection demonstrates the indelible influence he had on speculative literature.” —Publishers Weekly

Richard Matheson (1926–2013) was born in New Jersey and started living and working in California in 1951. In addition to novels in the mystery, science fiction, horror, fantasy, and western fields, he wrote many film and television scripts, including “Nightmare at 20,000 Feet” from The Twilight Zone. He also wrote episodes of Have Gun, Will Travel, Night Gallery, and Star Trek. Several of his novels and stories have been made into movies, including The Shrinking Man, I Am Legend, and What Dreams May Come (starring Robin Williams). Over the course of his career he won the World Fantasy Lifetime Achievement Award, the Bram Stoker Award for Life Achievement, the Hugo Award, the Edgar Allan Poe Award, the Golden Spur Award, and the Writer’s Guild Award.