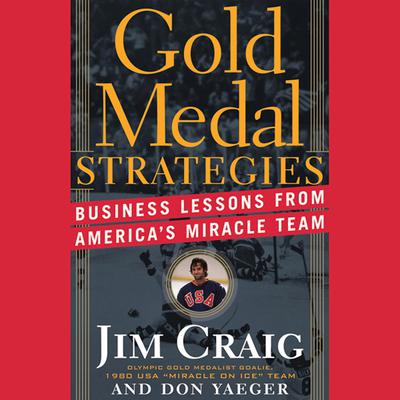 By Jim Craig  and Don Yaeger
Read by Dennis Holland

It's been called the greatest upset of all time.  It's been called the most memorable Olympic moment ever.  It's even been called the "Miracle on Ice"the best moment in the history of American sports.  No matter which superlative is used, no one can deny that the U.S. men's hockey team defeat of the Soviet Union in the medal round of the Lake Placid Olympic Games was a defining moment for an American public that saw the game as symbolic of the Cold War struggle between the two super-powers. The U.S. team's goalie was a Boston University student named Jim Craig, today a keynote speaker to business audiences around the U.S. on the team and leadership lessons from that famous team.  His book explains what he says in his keynote speech, about teams, leadership, motivation, and other key management topics.  It dissects and analyzes the elements of a successful team, how to assemble one, and what philosophies will keep the team's shared goal a reality.  It outlines the necessary skills and details the specific techniques you need to maximize your business readiness, competitive cooperation, strategies, and attack. Key principles include: "Great Teams Have a Real or Invented Enemy" "Great Teams Are the Product of Meticulous Recruiting" and other insights that will help any business perform at an Olympic level.