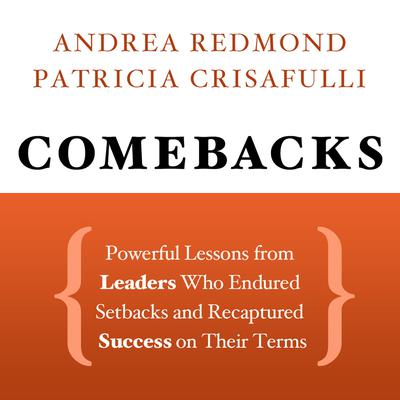 Comebacks: Powerful Lessons from Leaders Who Endured Setbacks and Recaptured Success on Their Terms

By Andrea Redmond  and Patricia Crisafulli
Read by Jane Jacobs

In turbulent economic times, when careers are derailed by layoffs and leaders are forced to rewrite their professional plans, readers are hungry for introspection that can enlighten as well as uplift. Comebacks features an all-star cast of business leaders who suffered a public fall from the pinnacle of their careers, often in the midst of extreme media scrutiny. Based on revealing interviews, the ten profiles in the book provide a behind-the-headline glimpse into the lives of seasoned leaders, showing how they drew upon resources, both internal and external, to navigate their way forward and to learn leadership and life lessons that allowed them to excel in future ventures. Together, the ten profiles reveal that all leaders face adversity, but true leaders turn adversity into success--and redefine success through their leadership. High-profile leaders featured include: Jamie Dimon, renowned CEO of JPMorgan Chase, who at the peak of his career with Citigroup was fired as president Former HP Chair Patricia Dunn who, forced to resign after being indicted for corporate espionage charges and while battling cancer, was exonerated from any wrongdoing and now is active in philanthropic work. Former Baxter International CEO Harry Kraemer who, after 22 years at the pharmaceutical firm, had to step down due to poor corporate earnings, is now a highly regarded business professor at Northwestern University Former Ford Motor Company CEO Jacques Nasser who, forced to resign from the automaker after devoting years to the company, has recently landed the coveted position of Chairman of Chairman of BHP Billiton, the worlds largest natural resources company. Former founder and CEO of JetBlue David Neeleman who, asked to step down after a series of weather-related delays in 2007 caused an uproar among passengers and consumers, has moved on to found a new airline in Brazil. Honest and soul-searching, the stories in Comebacks will resonate with readers who are experiencing their own reversal, are disillusioned by career choices, or are exploring other paths aligned with their values and priorities.

Andrea Redmond is an expert in leadership and governance and is a well-regarded consultant who works with corporate boards, CEOs, Fortune 500 companies, and private investors. She sits on several boards of directors, including the Allstate Corporation, Children’s Memorial Hospital, Northwestern University Hospital, and the Robert H. Lurie Cancer Center.

Patricia Crisafulli is the author of several books, including the New York Times bestseller The House of Dimon, a leadership profile of JPMorgan Chase CEO Jamie Dimon. A former business journalist for the Chicago bureau of Reuters America, Crisafulli’s articles have appeared in the New York Times, Chicago Tribune, Boston Globe, and other national newspapers. She has been featured on national television and in radio broadcasts, as well as in several magazines and newspapers.