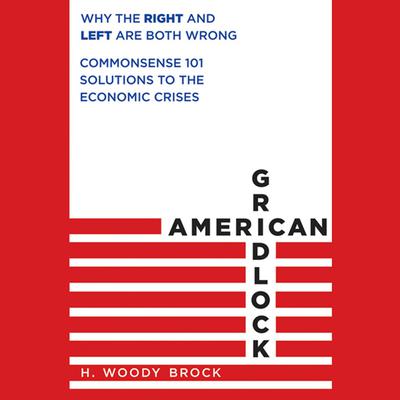 American Gridlock: Why the Right and Left Are Both Wrong - Commonsense 101 Solutions to the Economic Crises

Due to an alleged breakdown of capitalism, the U.S. is in perilous shape.  Given the long-term retrenchment of consumers, there is little likelihood of a return to strong economic growth.   Meanwhile, the U.S. fiscal deficit is at a record 12% of GDP, and will likely remain high for decades.  Newscasters and pundits alike are asking whether the U.S. could become a banana republic and everyday citizens are concerned that politicians are more interested in getting elected than offering genuine solutions.  In Capitalism 2.0 economist Woody Brock attempts to bridge the Left/Right divide and provide a path out of our economic quagmire.  It is not a question of free market capitalism versus a government controlled economy, Brock writes.  Rather it is a question of enacting policies to generate economic growth to reduce our debt-to-GDP ratio and to reform our political system to prevent politicians from mortgaging our future by promising benefits that we can no longer afford.  Fundamentally, Brock argues we need to re-think our moribund political philosophies and to understand that capitalism is consistent with a just society, and that political parties by serving the short-term interests of their constituent groups are the greatest danger to the U.S. economy and the U.S. as a global power.