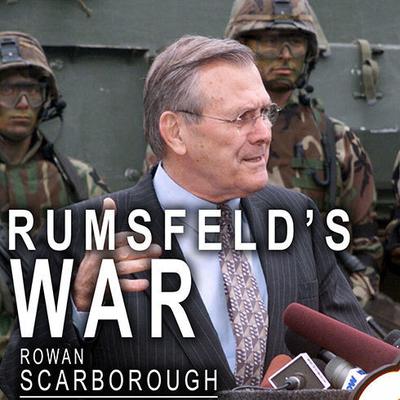 The man in the cockpit fighting the war on terror. When terrorists crashed a plane into the Pentagon, he was there-helping carry the wounded to safety. And he's been there-leading the war on terror, directing its operations around the world in both open and covert missions, and bluntly focusing on one primary goal: killing terrorists. He is Donald Rumsfeld. His great fear was a second Pearl Harbor. When it happened on September 11, 2001, he led the charge to make sure it never happens again. This book takes you inside Rumsfeld's Pentagon, detailing the far-sighted, courageous decisions he has made to enable our military to fight this most unconventional of wars. Rowan Scarborough, veteran national security reporter for the Washington Times, has had access to Rumsfeld himself as well as to numerous never-before-released documents that show not only how Rumsfeld is fighting the war, but how he is fighting the bureaucracy and remaking the American military, shifting the focus from the ingrained "can't-do" bureaucracy to the special operations Green Berets, SEALs, and others who live by "can-do." Many of Rumsfeld's hard-won victories are revealed here for the first time. Scarborough interviewed scores of Rumsfeld's friends and colleagues, including former president Gerald Ford, economist Arthur Laffer, former speaker of the House Newt Gingrich, and many military personnel. He also provides details of some highly secretive Pentagon operations-carried out under Rumsfeld's supervision by groups that most Americans don't even know exist. In addition, Scarborough offers an enlightening comparison between Rumsfeld's decisiveness and willingness to act and declare a war on terror and the Clinton administration's lassitude, distraction, and treatment of terrorism as a law enforcement issue during al Qaeda's astonishingly rapid rise in the 1990s. Scarborough concludes that history will surely judge Rumsfeld as "one of America's most important defense leaders." Rumsfeld's War reveals why-and how much of the bold new military strategy and vision that we are implementing now in the war on terror we owe to one brilliant, brave, and tenacious man: Donald Rumsfeld.

Rowan Scarborough has covered the Pentagon for the Washington Times for nearly two decades and is one of the most respected—and news-breaking—defense reporters in the country, with unparalleled sources. A Navy veteran, he is the author of Rumsfeld’s War and coauthor of “Inside the Ring,” the most widely read weekly column for Pentagon insiders.