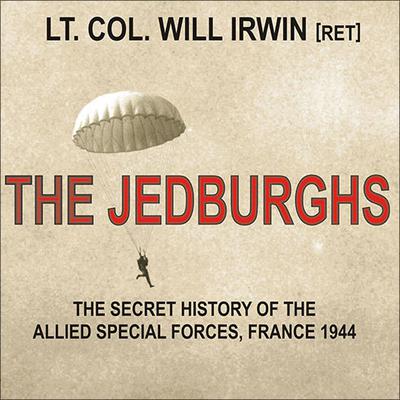 By Will Irwin
Read by Patrick Lawlor

The first full history of the pioneering Special Forces units of World War II—dropped behind German lines into France to assist with the D-Day landings—told by a former U.S. Special Forces colonel with unique access to surviving veterans The story of the Special Forces in World War II has never fully been told before. Information about them began to be declassified only in the 1980s. Known as the Jedburghs, these Special Forces were selected from members of the British, American, and Free French armies to be dropped in teams of three deep behind German lines. There, in preparation for D-Day, they carried out what we now know as unconventional warfare: supporting the French Resistance in guerrilla attacks, supply-route disruption, and the harassment and obstruction of German reinforcements. Always, they operated against extraordinary odds. They had to be prepared to survive pitched battles with German troops and Gestapo manhunts for weeks and months while awaiting the arrival of Allied ground forces. They were, in short, heroes. The Jedburghs finally tells their story and offers a new perspective on D-Day itself. Will Irwin has selected seven of the Jedburgh teams and told their stories as gripping personal narratives. He has gathered archival documents, diaries, and correspondence, and interviewed Jed veterans and family members in order to present this portrait of their crucial role—-a role recognized by Churchill and Eisenhower—in the struggle to liberate Europe in 1944-45. This is narrative history at its most compelling; a vivid drama of the battle for France from deep behind enemy lines.

Irwin's detailed retelling of these early covert operations and his ability to place these relatively small operations in the context of the Allied campaign will please military history readers. —Publishers Weekly