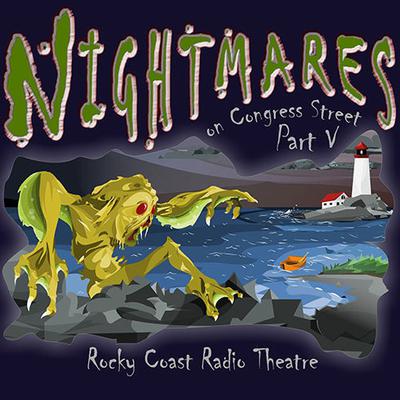 By various authors
Read by a full cast

They're baaaaaaaaaaaaacckkkkk!!! Rocky Coast Radio Theatre returns with yet another copious cornucopia of classic concoctions, crafted and compiled for the captive congregation (gotta love that thesaurus!). Nightmares on Congress Street, Part V offers dramatized adaptations (complete with music and sound effects) of chilling stories penned by Edgar Allan Poe, Hugh B. Cave, and H. P. Lovecraft, as well as a few additional treats. So douse the lights, snuggle up with your favorite corpse—oops! "life-challenged" person—and prepare to be thoroughly goosebumped.

These presentations of modern tales of terror have top-notch production values and excellent music.... Every one is a contemporary gem designed to scare you. They succeed. —AudioFile

Hugh B. Cave (1910–2004) was born in England and came to the United States as a child, eventually settling in Boston. Best known for his works of pulp fiction, he authored hundreds of books, short stories, and collections, including The Cross on the Drum, Larks Will Sing, The Dawning, Long Live the Dead, Bitter/Sweet, and many others. He received lifetime achievement awards from the International Horror Guild, the Horror Writers Association, and the World Fantasy Convention.

Michael Duffy is Time’s Washington Bureau Chief and directs the coverage of presidential, political, and national affairs for both the magazine and website.

Alex Irvine is the writer of the Marvel games Avengers Alliance, Marvel War of Heroes, and Marvel Puzzle Quest, which together have seen more than fifty million players. He has also written comics and novels for Marvel. His award-winning original novels include Buyout, The Narrows, and A Scattering of Jades.