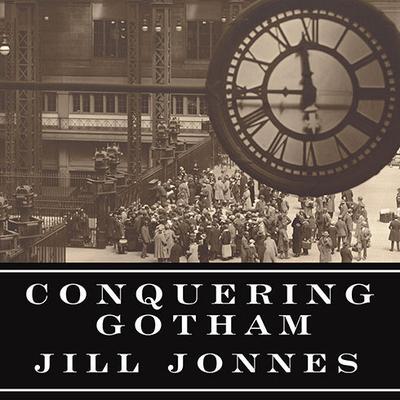 Conquering Gotham: A Gilded Age Epic: The Construction of Penn Station and Its Tunnels

The demolition of Penn Station in 1963 destroyed not just a soaring neoclassical edifice but also a building that commemorated one of the last century's great engineering feats—the construction of railroad tunnels into New York City. Now, in this gripping narrative, Jill Jonnes tells this fascinating story—a high-stakes drama that pitted the money and will of the nation's mightiest railroad against the corruption of Tammany Hall, the unruly forces of nature, and the machinations of labor agitators. In 1901, the president of the Pennsylvania Railroad, Alexander Cassatt, determined that it was technically feasible to build a system of tunnels connecting Manhattan to New Jersey and Long Island. Confronted by payoff-hungry politicians, brutal underground working conditions, and disastrous blowouts and explosions, it would take him nearly a decade to make Penn Station and its tunnels a reality. Set against the bustling backdrop of Gilded Age New York, Conquering Gotham will enthrall fans of David McCullough's The Great Bridge and Ron Chernow's Titan.

David Drummond's voice deserves five stars.... The author's skill and a narrator perfect for nonfiction will delight lovers of true stories from the past. —AudioFile
“A human account of how a few visionaries from the Pennsylvania Railroad connected the rest of the country to the nation’s greatest port, and how their Philadelphia-centric perspective doomed the world’s largest train station.” —New York Times
“Lush and lovely prose.” —Baltimore Sun
“In the tradition of David McCullough’s narrative of the Brooklyn Bridge…Intelligent history about building an indispensable part of our infrastructure.” —Kirkus Reviews (starred review)

Jill Jonnes is a historian and the author of Empires of Light: Edison, Tesla, Westinghouse, and the Race to Electrify the World and South Bronx Rising: The Rise, Fall & Resurrection of an American City. She has also been an NEH scholar and has received several grants from the Ford Foundation.