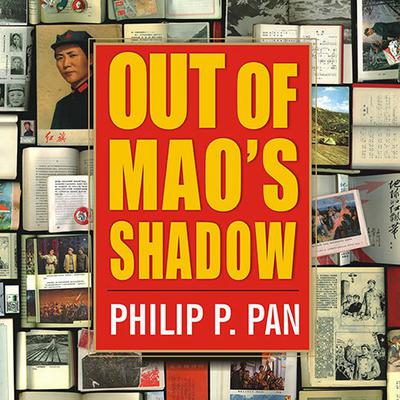 Out of Mao's Shadow: The Struggle for the Soul of a New China

Prize-winning journalist Philip P. Pan offers an unprecedented inside look at the momentous battle underway for China's future. On one side is the entrenched party elite determined to preserve its authoritarian grip on power. On the other is a collection of lawyers, journalists, entrepreneurs, activists, hustlers, and dreamers striving to build a more tolerant, open, and democratic China. The outcome of this dramatic, hidden struggle will shape China's rise to superpower status—and determine how it affects the rest of the world. From factories in the rusting industrial northeast to a tabloid newsroom in the booming south, from a small-town courtroom to the plush offices of the nation's wealthiest tycoons, Pan speaks with men and women fighting and sacrificing for change. An elderly surgeon exposes the government's cover-up of the SARS epidemic. A filmmaker investigates the execution of a student in the Cultural Revolution. A blind man is jailed for leading a crusade against forced abortions carried out under the one-child policy. Out of Mao's Shadow offers a startling perspective on China and its remarkable transformation, challenging conventional wisdom about the political apathy of the Chinese people and the notion that prosperity leads automatically to freedom. Like David Remnick's Lenin's Tomb, this is the moving story of a nation in transition, of a people coming to terms with their past.

Pan's stirring reportage shows that, even in China, the individual can make a difference---at a price. —Publishers Weekly Starred Review
“As correspondent for the Washington Post, Philip Pan covered China like no one else, using his fluency in the language to penetrate Chinese society. He goes beyond his newspaper reporting to tell the story of Chinese people pressing unsuccessfully for political change. Pan’s book gives lie to the notion that China is inevitably heading toward democratization.” —James Mann, New York Times bestselling author of Rise of the Vulcans
“Pan is one of the finest American correspondents to have worked in China, a penetrating reporter who works from the ground up. This is an extraordinarily important book about China’s unfinished politics.” —Steve Coll, New York Times bestselling author of The Bin Ladens
“The immediacy of first-rate reportage and the emotional depth of field of a novel.” —New York Times
“Pan’s stirring reportage shows that, even in China, the individual can make a difference—at a price.” —Publishers Weekly (starred review)
“Pan, former Beijing bureau chief for the Washington Post, traveled China and talked to officials, journalists, artists, entrepreneurs, and ordinary citizens to get a portrait of an extraordinary time in that nation’s—and the world’s—history…Pan presents the perspective of Chinese with hopes for a democratic future in China, even as that nation struggles to reconcile its past and future ambitions and its place in the broader world.” —Booklist
“Philip Pan has brought great patience and a rare sensitivity to political reporting in China. This is the story of how power actually works there.” —Peter Hessler, author of Oracle Bones: A Journey through Time in China
“Out of Mao’s Shadow is a stunningly researched and crafted book, filled with tales of individual heroism, triumph, and heartbreak. Pan shares his subjects’ relentless curiosity and drive to find truth; the result is a book that’s immediate, moving, and ultimately thrilling.” —Rachel DeWoskin, author of Foreign Babes in Beijing: Behind the Scenes of a New China
“Philip Pan’s book is a masterpiece of reportage, revealing the layers of dirt and pain that lurk just beneath the shiny surface of modern China.” —Rob Gifford, National Public Radio correspondent and author of China Road: A Journey into the Future of a Rising Power

Philip P. Pan is the Washington Post’s bureau chief in Moscow and the newspaper’s former Beijing bureau chief. During his tour in China from 2000 to 2007, he won the Livingston Award for Young Journalists in international reporting, the Overseas Press Club’s Bob Considine Award for best newspaper interpretation of international affairs, and the Asia Society’s Osborn Elliott Prize for excellence in Journalism on Asia. He lives with his wife and son in Moscow.