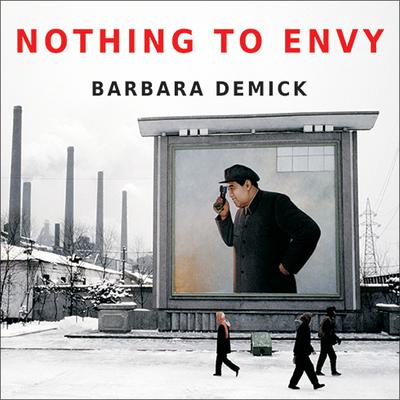 Nothing to Envy: Ordinary Lives in North Korea

Barbara Demick's Nothing to Envy follows the lives of six North Koreans over fifteen years—a chaotic period that saw the death of Kim Il-sung and the unchallenged rise to power of his son, Kim Jong-il, and the devastation of a far-ranging famine that killed one-fifth of the population. Taking us into a landscape never before seen, Demick brings to life what it means to be an average Korean citizen, living under the most repressive totalitarian regime today—an Orwellian world in which radio and television dials are welded to the one government station, a country that is by choice not connected to the Internet, a society in which outward displays of affection are punished, and a police state that rewards informants and where an offhanded remark can send a citizen to the gulag for life. Demick's subjects—a middle-aged party loyalist and her rebellious daughter, an idealistic female doctor, an orphan, and two young lovers—all hail from the same provincial city in the farthest-flung northern reaches of the country. One by one, we witness the moments of revelation, when each realizes that they have been betrayed by the Fatherland and that their suffering is not a global condition but is uniquely theirs. Nothing to Envy is the first book about North Korea to go deep inside the country, beyond the reach of government censors, and penetrate the mind-set of the average citizen. It is a groundbreaking and essential addition to the literature of totalitarianism.

Strongly written and gracefully structured...[Demick] vividly and evocatively portrays courageous individuals and a tyrannized state within a saga of unfathomable suffering punctuated by faint glimmers of hope. —Booklist Starred Review
“Excellent…lovely work of narrative nonfiction…a book that offers extensive evidence of the author’s deep knowledge of this country while keeping its sights firmly on individual stories and human details.” —New York Times
“A deeply moving book.” —Wall Street Journal
“These are the stories you’ll never hear from North Korea’s state news agency.” —New York Post
“The ring of authority as well as the suspense of a novel.’’ —Washington Times
“Elegantly structured and written, Nothing to Envy is a groundbreaking work of literary nonfiction.” —Slate
“Excellent new book is one of only a few that have made full use of the testimony of North Korean refugees and defectors. A delightful, easy-to-read work of literary nonfiction, it humanizes a downtrodden, long-suffering people whose individual lives, hopes and dreams are so little known abroad that North Koreans are often compared to robots… The tale of the star-crossed lovers, Jun-sang and Mi-ran, is so charming as to have inspired reports that Hollywood might be interested.” —San Francisco Chronicle
“There’s a simple way to determine how well a journalist has reported a story, internalized the details, seized control of the narrative and produced good work. When you read the result, you forget the journalist is there. Barbara Demick, the Los Angeles Times’ Beijing bureau chief, has aced that test in Nothing to Envy: Ordinary Lives in North Korea, a clear-eyed and deeply reported look at one of the world’s most dismal places.’’ —Cleveland Plain Dealer
“A fascinating and deeply personal look at the lives of six defectors from the repressive totalitarian regime of the Republic of North Korea…As Demick weaves their stories together with the hidden history of the country’s descent into chaos, she skillfully re-creates these captivating and moving personal journeys.” —Publishers Weekly (starred review)
“In spite of the strict restrictions on foreign press, award-winning journalist Demick caught telling glimpses of just how surreal and mournful life is in North Korea… Strongly written and gracefully structured, Demick’s potent blend of personal narratives and piercing journalism vividly and evocatively portrays courageous individuals and a tyrannized state.” —Booklist (starred review)

Barbara Demick is the Beijing bureau chief of the Los Angeles Times. Her reporting on North Korea won the Overseas Press Club’s award for human rights reporting as well as awards from the Asia Society and the American Academy of Diplomacy. Her coverage of Sarajevo for the Philadelphia Inquirer won the George Polk Award and the Robert F. Kennedy Journalism Award and was a finalist for the Pulitzer Prize in international reporting. Barbara is the author of several books, including Logavina Street: Life and Death in a Sarajevo Neighborhood and Nothing to Envy: Ordinary Lives in North Korea.