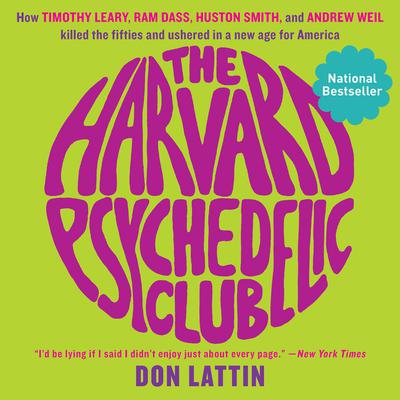 The Harvard Psychedelic Club: How Timothy Leary, Ram Dass, Huston Smith, and Andrew Weil Killed the Fifties and Ushered in a New Age for America

“[Don Lattin] has created a stimulating and thoroughly engrossing read.” —Dennis McNally, author of A Long Strange Trip: The Inside History of the Grateful Dead, and Desolate Angel: Jack Kerouac, the Beat Generation, and America

It is impossible to overstate the cultural significance of the four men described in Don Lattin’s The Harvard Psychedelic Club. Huston Smith, tirelessly working to promote cross-cultural religious and spiritual tolerance. Richard Alpert, a.k.a. Ram Dass, inspiring generations with his mantra, “be here now.” Andrew Weil, undisputed leader of the holistic medicine revolution. And, of course, Timothy Leary, the charismatic, rebellious counter-culture icon and LSD guru. Journalist Don Lattin provides the funny, moving inside story of the “Cambridge Quartet,” who crossed paths with the infamous Harvard Psilocybin Project in the early 60’s, and went on to pioneer the Mind/Body/Spirit movement that would popularize yoga, vegetarianism, and Eastern mysticism in the Western world.

“This groovy story unfurls—chronicling the lives of men who were brilliant but damaged, soulful but vengeful, zonked-out but optimistic and wry—like a ready-made treatment for a sprawling, elegiac, and crisply comic movie…I’d be lying if I said I didn’t enjoy just about every page.” —New York Times
“With equal parts keen historicity and great humor, Lattin chronicles how these founding fathers of the so-called New Age movement in the US and worldwide met at Harvard in the early 60s and—despite rivalries, infighting, and backstabbing—managed to change the spiritual landscape for generations to come.” —Chicago Sun-Times
“Lattin weaves the biographies of these brilliant men into a compelling tale of possibilities and disappointments, angels and demons, triumph and tragedy, a page-turner that can stand proudly alongside its fictional counterparts.” —Northern Dutchess News
“Thoroughly engaging…Packing his book with strange, wonderful scenes, Lattin argues that America would never be the same because of an unlikely quartet that did time—and drugs—at Harvard in the early 1960s.” —New York Post
“A colorful tale.” —Boston Globe

Don Lattin is one of the nation’s leading journalists covering alternative and mainstream religious movements and figures in America. His work has appeared in dozens of US magazines and newspapers, including the San Francisco Chronicle, where he covered the religion beat for nearly two decades.