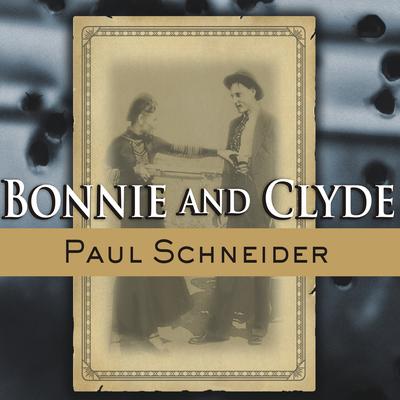 Bonnie and Clyde: The Lives Behind the Legend

In Paul Schneider's hands, the legend behind the daring movie that revolutionized Hollywood becomes the true story of Bonnie and Clyde. Told in the lovers' own voices, it offers verisimilitude and drama to match Truman Capote's In Cold Blood. Strictly nonfiction—no dialogue or other material has been made up—and set in the dirt-poor Texas landscape that spawned the star-crossed outlaws, the brilliantly researched and dramatically crafted tale opens with a murderous jail break and ends with the ambush and shoot-out that consigned their bullet-riddled bodies to the front seat of a hopped-up getaway car. Bonnie Parker and Clyde Barrow's relationship was, at the core, a toxic combination of infatuation blended with an instinct for going too far too fast. The poetry-writing, petite Bonnie and her diminutive, gun-crazy lover (she at four feet, ten inches tall, he barely 125 pounds) drove lawmen wild, slipping the noose every single time. That is, until their infamy caught up with them in the famous ambush that literally blasted away their four years of live-action rampage in seconds. Without glamorizing the killers or vilifying the cops, this book, alive with action and high-level entertainment, provides a complete picture of America's most famous outlaw couple and the culture that created them.

[A] fast-paced account…. A pleasure for true-crime buffs. —Kirkus
“Schneider, in particular, emphasizes the social climate of the era, as encountered especially by Clyde—oddly, the book is composed in the second person, as addressed empathetically to Clyde himself, leading the author into language that is impressionistic and somewhat disconcerting to encounter in sourced nonfiction. Although Schneider does not justify the criminal lives of the Barrows, his aim may be to show that their story is relevant today, when members of modern street gangs sometimes view a life of crime as their best way out of poverty.” —Library Journal
"[A] fast-paced account… Schneider does a righteous job of understanding Bonnie and Clyde, and if they’re not wholly sympathetic—they did kill folks, after all—they’re not wholly monstrous either. Thanks to Penn’s film, there are plenty of people who have some sense of how they lived and died—spectacularly, and without much regard for the messes they left behind. Schneider shows how oddly accurate the film got at least those final moments, all rat-a-tat machine guns and chirping cicadas. A pleasure for true-crime buffs.” —Kirkus Reviews
“Bonnie Parker wrote her own legend in poetry as she and lover Clyde Barrow eluded authorities throughout their robbery and murder spree during the Great Depression. Her poems are just one of the entry points to this story for author Paul Schneider and narrator Patrick Lawlor. From time to time, Lawlor shifts into a portrayal of their thoughts, including their consciences, complete with the drawls of their native Texas. He also delivers the “rat-a-tat” gunfire that is so much a part of their lives. More conventional devices—news reports, police logs, and the words of friends and witnesses—are also used to convey the escalation of their crimes. Some might be put off by the story’s shifting point of view, but the technique draws listeners in.” —AudioFile