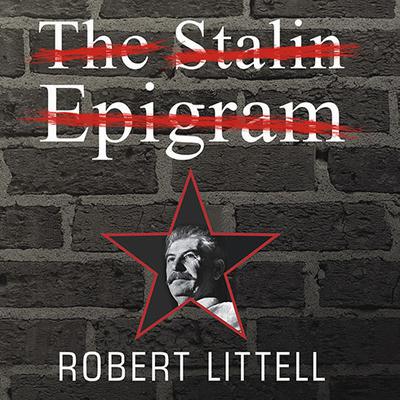 The Stalin Epigram: A Novel

By Robert Littell
Read by John Lee and Anne Flosnik

The Stalin Epigram is a masterful rendering of the life of Osip Mandelstam, one of Russia's greatest poets of the twentieth century. His heroic protest against the Stalin regime—particularly his outspoken criticism of the collectivization that drove millions of Russian peasants to starvation—finally reached its apex in 1934. When he composed a searing indictment of Stalin in a sixteen-line poem, secretly passed from person to person through recitation, the poet was arrested. It is widely accepted that Stalin himself was directly involved in Mandelstam's exile and his death in a Siberian transit camp in 1938. A master of historical detail and cultural authenticity, bestselling author Robert Littell based this novel in part on a memorable, intimate meeting with Mandelstam's wife in 1979. Narrated by Mandelstam's wife, his friends Boris Pasternak and Anna Akhmatova, and Mandelstam himself, this lucid account of the relationships between the artists, politicians, and proletariat of Stalinist Russia is an astounding moment in history brought to life by a perceptive, immensely talented writer.

Robert Littell is the author of twenty highly acclaimed novels, many about the Cold War and the Soviet Union, including his masterwork, New York Times bestseller The Company, and Legends, winner of the Los Angeles Times Book Award for Best Mystery/Thriller.