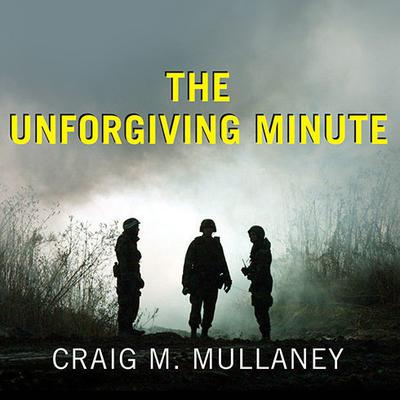 The Unforgiving Minute: A Soldier's Education

Craig M. Mullaney's education had been relentlessly preparing him for this moment. The four years he spent at West Point and the harrowing test of Ranger School readied him for a career in the Army. His subsequent experience as a Rhodes scholar at Oxford couldn't have been further from the Army and his working-class roots, and yet the unorthodox education he received there would be surprisingly relevant as a combat leader. Years later, after that unforgettable experience in Afghanistan, he would return to the United States to teach history to future Navy and Marine Corps officers at the Naval Academy. He had been in their position once, and he had put his education to the test. How would he use his own life-changing experience to prepare them? The Unforgiving Minute is the extraordinary story of one soldier's singular education. From a hilarious plebe's-eye view of the author's West Point experience to the demanding leadership crucible of Ranger School's swamps and mountains, to a two-year whirlwind of scintillating debate, pub crawls, and romance at Oxford, Mullaney's winding path to the battlegrounds of Afghanistan was unique and remarkable. Despite all his preparation, the hardest questions remained. When the call came to lead his platoon into battle and earn his soldiers' salutes, would he be ready? Was his education sufficient for the unforgiving minutes he'd face? A fascinating account of an Army captain's unusual path through some of the most legendary seats of learning straight into a brutal fight with Al Qaeda in Afghanistan, The Unforgiving Minute is, above all, an unforgettable portrait of a young soldier grappling with the weight of his hard-earned knowledge while coming to grips with becoming a man.

McLaren's subtle treatment avoids exaggeration while preserving the emotional moods the author intended for his memories of romance, combat, and death. —AudioFile
“One of the most compelling memoirs yet to emerge from America’s 9/11 era…This is more than a soldier’s story; it is a work of literature.” —Steve Coll, author of the Pulitzer Prize winner Ghost Wars
“One of the most thoughtful and honest accounts ever written by a young Army officer confronting all the tests of life.” —Bob Woodward, New York Times bestselling author of State of Denial
“Mullaney writes a great story—a true privilege to read. Entertaining, balanced, and graceful, The Unforgiving Minute is a powerful narrative of purpose, responsibility, courage, and personal growth. Every young man and woman in America should read this book and aspire to his standard of public service.” —General Wesley Clark, USA (Ret.)
“One man’s story, warmly and credibly told, and its focus is on the idealism that he brought to military service…The Unforgiving Minute finds both suspense and pathos in the events that took place under its author’s command.” —New York Times
“[An] extraordinary book…Readers will be fascinated to look over his shoulder.” —Washington Post
“Eager for the physical and mental challenges of West Point, [Mullaney’s] plebe’s-eye view is at once hilarious and harrowing…Now, as he watches his younger brother chart a similar course, he recounts his life path, examining his own unforgiving minutes. In the process, Mullaney tells a remarkable story.” —Barnes&Noble.com, editorial review
“Mullaney has provided a far greater service to his nation by penning a riveting memoir that should be mandatory reading by every junior officer who dons the military uniform.” —ARMY Magazine
“Mullaney’s harrowing and humorous details make the book not only a soldier’s story but also a richly human one.” —Baltimore Sun
“Read the book and you know the caliber of the men and women leading our troops and the troops themselves…and the cost of sacrifices so few individuals endure in our name.” —Huffington Post
“Mullaney’s admirable, literate autobiography…adds much to knowledge of the modern army and makes a valuable contribution to the ongoing debate over what a ‘warrior’ is these days…Almost impossible to put down for anyone interested in the modern US Army or in modern warfare in general.” —Booklist
“Todd McLaren adapts his narration to the situations Mullaney describes…McLaren’s subtle treatment avoids exaggeration while preserving the emotional moods the author intended for his memories of romance, combat, and death. McLaren capitalizes on the author’s military brevity in describing war and captures his softer side as Shakespearean poetry punctuates his recollections of courting his wife during postgraduate study at Oxford.” —AudioFile

Craig M. Mullaney, a native Rhode Islander, graduated from West Point in 2000 and completed US Army Ranger School. After earning a Rhodes scholarship and studying history at Oxford, he trained with the Army’s 10th Mountain Division and deployed to Afghanistan, where he led an infantry rifle platoon in combat along the Afghanistan-Pakistan border. Upon his return, he joined the Old Guard, the US Army’s elite honor guard for Arlington National Cemetery, and was later selected to become an exchange officer teaching history at the US Naval Academy in Annapolis, Maryland. His decorations include the Bronze Star Medal, Combat Infantryman’s Badge, and the Army Commendation Medal with “V” Device. He is currently a member of the Obama-Biden Transition Project.