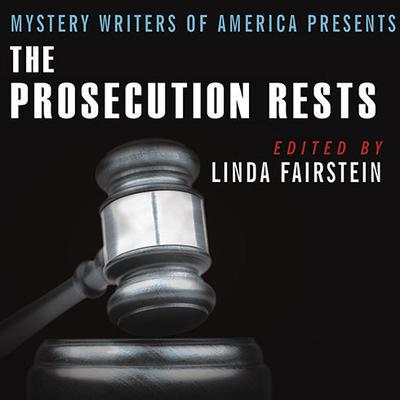 Mystery Writers of America Presents The Prosecution Rests: New Stories about Courtrooms, Criminals, and the Law

Bestselling author Linda Fairstein, who "makes legal issues more exciting than any high-speed chase" (The New York Times), presents these thrilling stories of lawyers under pressure, criminals facing the needle, and heartbroken families who hope for justice and who sometimes take it into their own hands. In James Grippando's "Death, Cheated," a lawyer defends his ex-girlfriend against the investors who bet $1.5 million on her death. In Barbara Parker's "A Clerk's Life," a disillusioned clerk at a corporate law firm suspects the worst of his colleagues when one of the firm's employees is murdered. In Phyllis Cohen's "Designer Justice," an accused murderer thinks he's lucked out when he lands a high-priced lawyer, only to learn that there are worse fates than being found guilty. This collection—filled with shocking twists, double-crosses, and edge-of-your-seat suspense—includes "The Secret Session," by Edward D. Hoch; "Designer Justice," by Phyllis Cohen; "Follow Up," by Jo Dereske; "By Hook or by Crook," by Charlie Drees; "The Letter," by Eileen Dunbaugh; "Spectral Evidence," by Kate Gallison; "Knife Fight," by Joel Goldman; "Death, Cheated," by James Grippando; "My Brother's Keeper," by Daniel J. Hale; "The Flashlight Game," by Diana Hansen-Young; "Mom Is My Co-Counsel," by Paul Levine; "Quality of Mercy," by Leigh Lundin; "The Mother," by Michele Martinez; "Red Dog," by Anita Page; "A Clerk's Life," by Barbara Parker; "Time Will Tell," by Twist Phelan; "The Evil We Do," by John Walter Putre; "Night Court," by S. J. Rozan; "Hard Blows," by Morley Swingle; "Custom Sets," by Joseph Wallace; "Bang," by Angela Zeman; and "Going Under," by Linda Fairstein.

“A stellar anthology…The consistently high quality of the twenty-two selections will lead many to hope the MWA will sponsor more volumes in this vein.” —Publishers Weekly (starred review)
“The entries range from funny and quirky to dark and disturbing, but, taken as a whole, they make a thoroughly entertaining work of crime fiction.” —Booklist
A stellar anthology…. consistently high quality. —Publishers Weekly Starred Review

Linda Fairstein is an author of crime fiction.