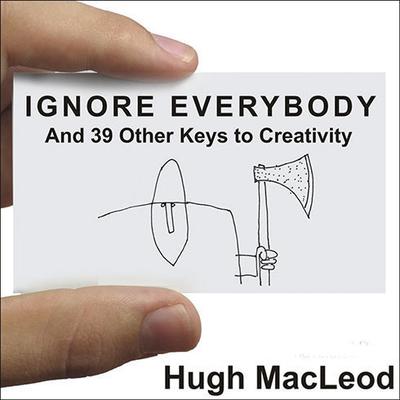 Ignore Everybody: And 39 Other Keys to Creativity

When Hugh MacLeod was a struggling young copywriter living in a YMCA, he started to doodle on the backs of business cards while sitting at a bar. Those cartoons eventually led to a popular blog—gapingvoid.com—and a reputation for pithy insight and humor, in both words and pictures. MacLeod has opinions on everything from marketing to the meaning of life, but one of his main subjects is creativity. How do new ideas emerge in a cynical, risk-averse world? Where does inspiration come from? What does it take to make a living as a creative person? Ignore Everybody expands on MacLeod's sharpest insights, wittiest cartoons, and most useful advice. For example: —Selling out is harder than it looks. Diluting your product to make it more commercial will just make people like it less. —If your plan depends on you suddenly being "discovered" by some big shot, your plan will probably fail. Nobody suddenly discovers anything. Things are made slowly and in pain. —Don't try to stand out from the crowd; avoid crowds altogether. There's no point trying to do the same thing as 250,000 other young hopefuls, waiting for a miracle. All existing business models are wrong. Find a new one. —The idea doesn't have to be big. It just has to be yours. The sovereignty you have over your work will inspire far more people than the actual content ever will. After learning MacLeod's forty keys to creativity, you will be ready to unlock your own brilliance and unleash it on the world.

William Dufris reads with humor and liveliness as he shares the author's argument for creativity in a complicated world and steps for personal creativity. —AudioFile

Hugh MacLeod worked as an advertising copywriter for more than a decade while developing his skills as a cartoonist and pundit. His blog is Gaping Void, and more than a million people have downloaded his e-book, How to be Creative, which inspired his book Ignore Everybody: And 39 Other Keys to Creativity. He also lectures and consults on Web 2.0 and its impact on business.