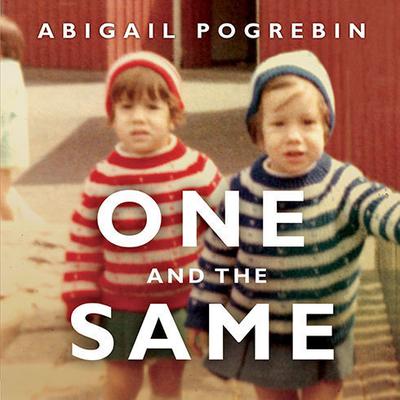 One and the Same: My Life as an Identical Twin and What I've Learned About Everyone's Struggle to Be Singular

Writer. Mother. Wife. New Yorker. Abigail Pogrebin is many things, but the one that has defined her most profoundly is "identical twin." Pogrebin's relationship with her sister—both as children, when they were inseparable, and today, when she longs for that uncomplicated intimacy—inspired her to examine the phenomenon of twinship, to learn how other identical pairs regard their doubleness and what experts are learning about how DNA impacts our sense of identity and shapes our lives. In One and the Same, Pogrebin presents a tapestry of twinship, weaving science reporting and personal memoir with the revelatory stories of other twins, such as two sisters who stopped speaking for three years; football stars Tiki and Ronde Barber, who admit their twinship comes before their marriages; a pair of bawdy, self-proclaimed "twin ambassadors" who have created a media empire around their twinness; and brothers whose shared genetic anomaly wrought unspeakable tragedy. In this stirring account, Pogrebin shows how living identical is both a celebration of sameness and a struggle for singularity that defines us all.

Abigail Pogrebin is the author of Stars of David: Prominent Jews Talk About Being Jewish. She was a senior correspondent for Brill’s Content and a contributing writer for Talk magazine, and she is now a freelance journalist whose work has appeared in many magazines and newspapers. A Yale graduate, she has also served as producer for 60 Minutes, Charlie Rose, Bill Moyers, and Fred Friendly. She lives with her husband and two children in Manhattan—a mile from her identical twin sister, New York Times reporter Robin Pogrebin.