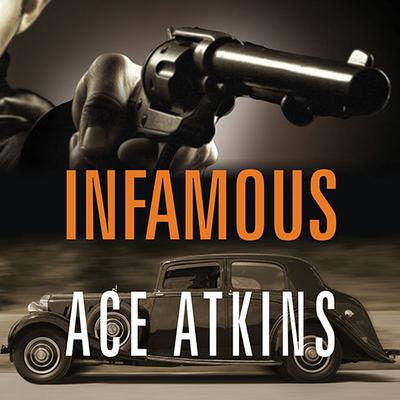 He has been compared to Lehane, Ellroy, and Pelecanos, but Ace Atkins's rich, raucous, passionate blend of historical novel and crime story is all his own—and never more so than in Infamous. In July 1933, the gangster known as George "Machine Gun" Kelly staged the kidnapping-for-ransom of an Oklahoma oil-man. He would live to regret it. Kelly was never the sharpest knife in the drawer, and what started clean soon became messy, as two of his partners cut themselves into the action; a determined former Texas Ranger makes tracking Kelly his mission; and Kelly's wife, ever alert to her own self-interests, starts playing both ends against the middle. The result is a mesmerizing tale set in the first days of the modern FBI, featuring one of the best femmes fatales in history—the Lady Macbeth of Depression-era crime—a great unexpected hero, and some of the most colorful supporting characters in recent crime fiction.

“Not just for crime fans, this should appeal to a wide readership.” —Publishers Weekly
Atkins brings to vivid life the henpecked George and the bloodthirsty Kathryn as he convincingly conjures up a past era. —Publishers Weekly
“Like many fine historical crime novels, Infamous offers a window on society, then and now.” —Booklist

Ace Atkins is the New York Times bestselling author of the Quinn Colson novels, the first two of which—The Ranger and The Lost Ones—were nominated for the Edgar Award for Best Novel. In addition, he is the author of several New York Times bestselling novels in the continuation of Robert B. Parker’s Spenser series. Before turning to fiction, he was a correspondent for the St. Petersburg Times, a crime reporter for the Tampa Tribune, and, in college, played defensive end for the undefeated Auburn University football team, for which he was featured on the cover of Sports Illustrated.