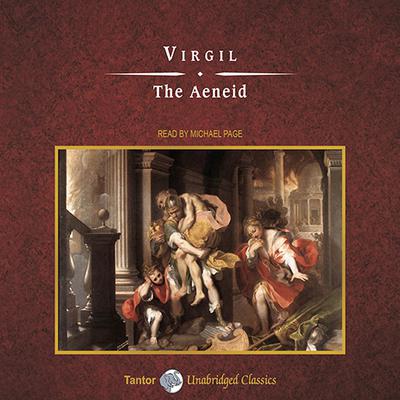 By Virgil
Read by Michael Page

After a century of civil strife in Rome and Italy, the poet Virgil wrote The Aeneid to honor the emperor Augustus by praising Aeneas, Augustus's legendary ancestor. As a patriotic epic imitating Homer, The Aeneid also set out to provide Rome with a literature equal to that of Greece. It tells of Aeneas, survivor of the sack of Troy, and of his seven-year journey: to Carthage, where he fell tragically in love with Queen Dido; to the underworld, in the company of the Sibyl of Cumae; and, finally, to Italy, where he founded Rome. It is a story of defeat and exile, and of love and war. Virgil's Aeneid is as eternal as Rome itself, a sweeping epic of arms and heroism—the searching portrait of a man caught between love and duty, human feeling, and the force of fate. Filled with drama, passion, and the universal pathos that only a masterpiece can express. The Aeneid is a book for all the time and all people. This version of The Aeneid is the classic translation by John Dryden.

Publius Vergilius Maro (70 BC–19 BC), usually called Virgil or Vergil in English, was a Roman poet of the Augustan period. He is known for three major works of Latin literature, the Eclogues (or Bucolics), the Georgics, and the epic Aeneid. He is traditionally ranked as one of Rome’s greatest poets. His Aeneid has been considered the national epic of ancient Rome from the time of its composition to the present day. He was born in a small village near Mantua in northern Italy and attended school at Cremona, Milan, and Rome, where he studied mathematics, medicine, and rhetoric. He devoted his life, from 30 to 19 BC, to the composition of The Aeneid, the national epic of Rome.