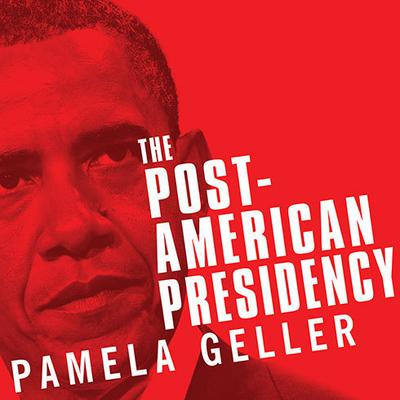 The Post-American Presidency: The Obama Administration's War on America

By Pamela Geller , with Robert Spencer
Read by Mel Foster

America is being tested in a way that she has never been tested before. Since taking the oath of office in January 2009, President Barack Obama has cheered our enemies and demoralized our allies. He is hard at work "remaking" America by destroying the free-market system and nationalizing major segments of our economy, demonizing dissent and restricting freedom of speech, turning against our longtime friends, and, above all, subjecting us to the determinations of foreign authorities. In this timely and urgent battle cry, Pamela Geller, founder of the widely popular Web site www.AtlasShrugs.com, and New York Times bestselling author Robert Spencer team up to expose the Obama administration's destructive agenda—largely ignored by the mainstream media—and rally Americans to protect the sovereignty of a country that is under siege by the highest levels of its own government. As Americans see their paychecks shrinking every day, Obama ignores our forefathers' founding principle: individual rights. Instead, he seeks to level the playing field—to transform both the global and national landscape in favor of our enemies—even if it means cutting America off at the knees. He envisions himself as more than just a president of the United States, but as a shaper of the new world order, an internationalist energetically laying the groundwork for global government: the president of the world. A vital guide to helping conservatives prepare for the tough battles ahead, The Post-American Presidency critically examines the Obama administration's ominous and revealing moves against our basic freedoms, particularly as he seizes control of the three engines of the American economy: health care, energy, and education. The Shining City on a Hill has gone dark. But America is not dead. The time is NOW to stand up and fight.

Barack Obama is the most radical individual ever to occupy the White House. This excellent book...explains exactly what that means and why its implications are fraught with such dangers. —David Horowitz, author of Radical Son

Pamela Geller is the editor and publisher of the Atlas Shrugs website and is a former associate publisher of the New York Observer. Her op-eds have appeared in the Washington Times, the American Thinker, Israel National News, and other publications.