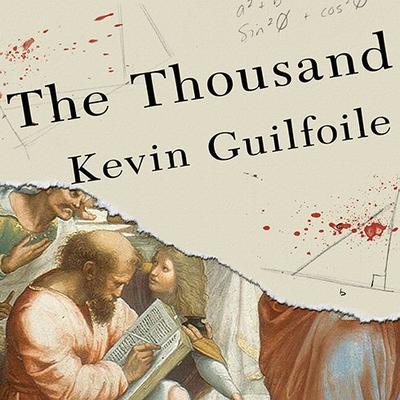 The Thousand: A Novel

In 500 BC, a mysterious ship appeared off the coast of what is now Italy. A man disembarked to address the frightened crowd along the shore. He called himself Pythagoras, and when he was done speaking, a thousand men and women abandoned their lives to follow him; his disciples would influence western philosophy, science, and mathematics for all time. Chicago, the present. Solomon Gold has tapped into valuable and dangerous secrets while composing his magnum opus: the Gold Completion of Mozart's infamous unfinished requiem. After he is murdered, his brilliant daughter—a girl whose uncanny mental gifts have left her both powerful and troubled—finds herself racing to understand his composition, his murder, and, as violence erupts all around her, a fractured, ancient cult descended from the original disciples of Pythagoras. The Thousand is ringing confirmation of Kevin Guilfoile's enormous talent.

Kevin Guilfoile's riveting new novel defies pigeon-holing. Part thriller, part dystopic science fiction.... You'll stay up all night until the pieces fall into place. —Sara Paretsky, New York Times bestselling author of Hardball
“A taut suspense thriller about a gifted girl and the ancient cult that wants to use her mental abilities for its own sketchy ends.” —Entertainment Weekly
“Guilfoile’s fast and furious new thriller…is jet-fueled by its author’s unerring sense of character and his nimble, fleet-footed prose.” —New York Times
“The Thousand is thrilling, intellectually stimulating, and has some of the most vivid characters in contemporary literature.” —Chicago Tribune

Kevin Guilfoile is the author of Cast of Shadows and has written for McSweeney’s, Salon, and the New Republic. He lives in Chicago with his wife and children.