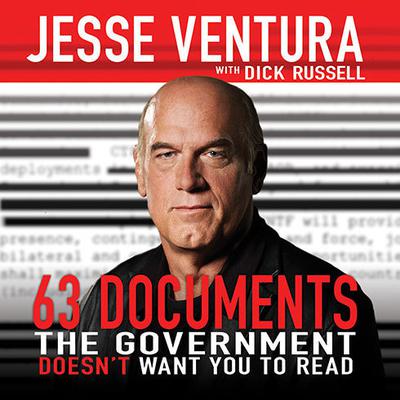 63 Documents the Government Doesn't Want You to Read

There's the Freedom of Information Act, and then there's Ventura's way. The official spin on numerous government programs is flat-out bull, according to Jesse Ventura. In this incredible collection of actual government documents, Ventura, the ultimate nonpartisan truth-seeker, proves it beyond any doubt. He and Dick Russell walk listeners through sixty-three of the most incriminating programs to reveal what really happens behind the closed doors. In addition to providing original government data, Ventura discusses what it really means and how regular Americans can stop criminal behavior at the top levels of government and in the media. Among the cases discussed: —The CIA's top-secret program to control human behavior —Operation Northwoods: the military plan to hijack airplanes and blame it on Cuban terrorists —The discovery of a secret Afghan archive, information that never left the boardroom —Potentially deadly healthcare cover-ups, including a dengue fever outbreak —What the Department of Defense knows about our food supply but is keeping mum Although these documents are now in the public domain, the powers that be would just as soon they stay under wraps. Ventura's research and commentary sheds new light on what they're not telling you—and why it matters.

Dick Russell is a nationally respected activist, environmentalist, and author of five critically acclaimed books, including The Man Who Knew Too Much and Don’t Start the Revolution Without Me! with Jesse Ventura. Russell is a prolific publisher in many of the nation’s top magazines and has been a guest on many national television and radio programs, including the Joan Rivers Show and NBC Nightly News. Russell divides his time between Boston and Los Angeles.