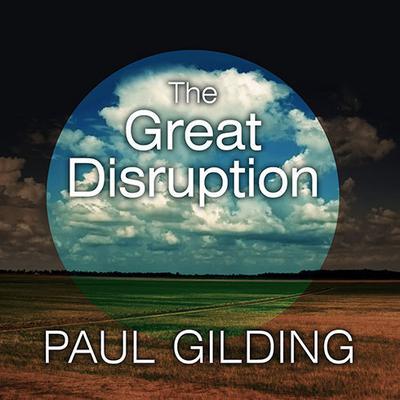 The Great Disruption: Why the Climate Crisis Will Bring On the End of Shopping and the Birth of a New World

It's time to stop just worrying about climate change, says Paul Gilding. We need instead to brace for impact because global crisis is no longer avoidable. This Great Disruption started in 2008, with spiking food and oil prices and dramatic ecological changes, such as the melting ice caps. It is not simply about fossil fuels and carbon footprints. We have come to the end of Economic Growth, Version 1.0, a world economy based on consumption and waste, where we lived beyond the means of our planet's ecosystems and sources. The Great Disruption offers a stark and unflinching look at the challenge humanity faces—yet also a deeply optimistic message. The coming decades will see loss, suffering, and conflict as our planetary overdraft is paid; however, they will also bring out the best humanity can offer: compassion, innovation, resilience, and adaptability. Gilding tells us how to fight—and in—what he calls the One Degree War to prevent catastrophic warming of the earth, and how to start today. The crisis represents a rare chance to replace our addiction to growth with an ethic of sustainability, and it's already happening. It's also an unmatched business opportunity: Old industries will collapse while new companies will literally reshape our economy. In the aftermath of the Great Disruption, we will measure "growth" in a new way. It will mean not quantity of stuff but quality and happiness of life. Yes, there is life after shopping.

Paul Gilding is an international thought leader and advocate for sustainability. He has served as head of Greenpeace International, built and led two companies, and advised both Fortune 500 corporations and community-based NGOs. A member of the core faculty for the Cambridge University Program for Sustainability Leadership, he blogs at www.PaulGilding.com, and his newsletter, the Cockatoo Chronicles, has subscribers around the world.