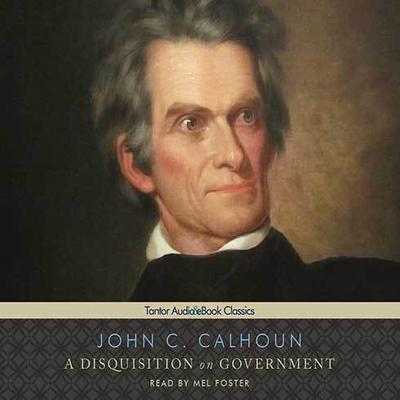 A Disquisition on Government

Written between 1843 and 1848, John C. Calhoun's A Disquisition on Government addresses such diverse issues as states' rights and nullification, slavery, and the growth of the federal judicial power. Articulating Calhoun's perspective on government as seen from the point of view of a permanent minority (the South), A Disquisition on Government relies on the doctrine of a concurrent majority. Calhoun's concurrent majority captures the idea that because unchecked majority rule can lead to tyranny over minority interests, minority groups should possess veto power government actions that affect them. Although Calhoun primarily intended this doctrine as a justification for slavery, the broader idea of a concurrent majority as a protection for minority rights has since become a pillar of American political thought.

John C. Calhoun (1782–1850) was a leading politician and political theorist during the first half of the nineteenth century. He served as the seventh vice president of the United States under John Quincy Adams and Andrew Jackson; a US senator from South Carolina; the sixteenth US Secretary of State under President John Tyler; and the 10th US secretary of war under President James Monroe. Along with A Disquisition on Government, he is the author of Discourse on the Constitution and Government of the United States.